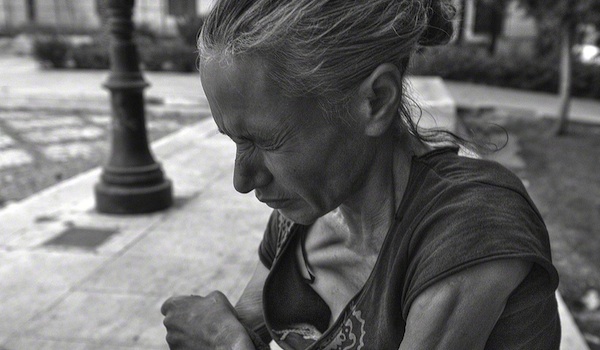 The dire economic situation is changing even the ‘drug game’ in Athens. The financial crisis  has forced more drug users into prostitution and more dangerous drugs that cost less but kill more. Undocumented immigrants are ‘recruited’ by local mafia and pushed into the illegal drug market, often as a way to pay off their trafficking fees.
It’s a cold winter afternoon and Maria* is fixing her makeup in a glittered storefront window in downtown Athens. Maria, an occasional sex worker, is 27 years old, but drug use and life on the streets have left her looking older.
Her two front teeth are missing and her skin badly damaged by ‘sisa’, a dangerous mix of crystal meth and unidentified chemicals that has invaded the Greek drug market over the last two years. Costing just two to three euros per fix, the new drug has proven a popular alternative to heroin.
The dire economic situation has forced more drug users into prostitution and addicts are more willing to take risks with men who pay more for unprotected sex. Maria’s clients are Greek married middle aged men who buy sex from drug users for 10 to 15 euros.
“They usually buy sex in the morning and they don’t use condoms”, says Maria, who recently discovered she was HIV positive. “I refuse unprotected sex, but men become pushy and it’s hard to say no”, she adds.
As Greece enters its third year of financial crisis, economic hardship and despair is fraying the country’s social fabric. In a nation of 11 million, almost four million people are unemployed, while those still working have seen their salaries cut by more than 30% since 2009.
As part of its strict austerity measures set by foreign creditors, Greece is forced to keep public health expenditures below 6% of its gross domestic product which was worth $298.73 billion dollars in 2011. However, the average for the countries of the Organization for Economic Cooperation and Development (OECD) is 9%.
While the Greek government has been reluctant to pass reforms that would hit the country’s oligarch families who control the financial sector, it was fast to cut social programmes and welfare by 40%, introduce patient fees for all outpatient visits, and slash the salaries of hospital staff.
As a result, the country has witnessed an alarming surge in intravenous drug usage, prostitution and HIV infections.
Until 2010, HIV infections amongst injecting drug users (IDU) were 10 to 15 per year. In 2011, this number jumped to 256, while in the first half of 2012 an additional 314 cases were reported, the Stockholm-based European Center for Disease Prevention and Control (ECDC) reported. This represents a total increase of almost 1,500%.
“The economic crisis has affected dramatically the lives of all Greeks, but people who use drugs were the hardest hit”, says Charalampos Poulopoulos, director of the Therapy Center for Dependent Individuals (KETHEA), one of Greece’s largest networks of drug outreach and rehab facilities. “Treating the addiction and keep people in a therapeutic community costs six times less than confinement. However, the government has cut social spending without taking into account the humanitarian and social cost. This creates a very dangerous situation”, he adds.
KETHEA alone, has seen its budget slashed by almost 8 million – from 24 to 16 million euros – since 2009 and its staff reduced by 15%.
“There is a feeling of despair among drug users. As all safety nets are tearing apart, users have lost their motivation to change their lives. And this also contributes to the rise of HIV infections”, Poulopoulos explained.
According to data from the Hellenic Center for Disease Control and Prevention (KEELPNO), there is an estimated 25,000 drug addicts in Greece with more than 10,000 being IDUs, mostly in Athens. However, many still feel they are just the tip of the iceberg.

Open drug use in Athens
In one of the most frequented streets of the Greek capital, Nikos*, 35, lies in a dirty blanket. Besides him, 40-year-old Yannis* prepares a mix of cheap heroin and sedatives known in the streets as ‘thai’ costing between five and seven euros per fix. With trembling hands Yannis shoots up ‘thai’ in his inner forearm. Families with children, young couples and migrants pass by, but no one cares what they are seeing.
“I either have to buy needles on the streets or share one after rinsing it with water,” says Nikos. “Pharmacies used to provide needles for a small fee or free of charge, but this has changed over the last two-three years.”
“Five to four years ago, it was easier to get needles. Now it’s getting tough,” says Dimitris*, a 50 year old heroin addict. “I earn my fix by selling syringes for one euro. Sometimes I sell them for 30 to 40 cents, sometimes for ten.”
Needles and syringes are distributed in Athens mainly through outreach workers who provide ‘kits’ containing needles, syringes, and other drug preparation equipment, along with condoms to users, free of charge. In 2011, there were about 120,000 syringes distributed according to ECDC data. This is approximately 15 syringes per user per year, still very low to an average of 200 syringes per user recommended by the World Health Organization as a measure to contain HIV epidemic.
“The situation is alarming as we have passed from four to five HIV infections among IDUs per year, to more than 500 in less than two years”, warns Marianela Kloka, director of Positive Voice, an Athens-based NGO working against the spread of HIV, adding that Greece has never had harm reduction policies in place.
“Budget cuts have worsened an already existing problem. Needle exchange programmes have never been adequate and there was a total lack of coordination among the different organizations engaged in harm reduction. Now that the financial crisis has changed the pattern of drug use and IDUs inject cheaper drugs several times per day, the need of greater needle coverage is urgent”, she adds.
Drug trade with impunity
The financial crisis has changed the type of drugs available in the Greek drug market that has adapted fast to the changing economic reality. ‘Thai’ and cocaine became the main drugs traded while locally produced crystal meth or ‘sisa’ is traded in specific areas of the city center.
A fix is sold in the shape of a tiny ball weighing no more than 0.01 of a gram forcing users to buy eight to ten shots per day to support their habit. As a result the profit for the dealers remains high, despite the low price of the fix, as each fix costs five to seven euro, depending on the kind of drug.
Drug trade in Athens downtown is well structured and is taking place around the historic centre and the surrounding neighborhoods. The areas are divided into ‘drug zones’ belonging to different criminal groups each one trading specific kind of drugs.
Undocumented immigrants mainly from sub-Saharan countries and north Africa are ‘recruited’ by local mafia and pushed into the illegal drug market, often as a way to pay off their trafficking fees.
Such is the case of Raymon*, 35, from Somalia, who entered Greece illegally after a 40 day perilous journey to reach the EU nation. After arriving along the Turkish coast, he was asked to jump in a rubber boat together with ten other men.
“We arrived on a rocky shore and the driver (of the boat) left us there. We asked a man where we were. ‘This is Greece’. We were happy; we were in Europe”.
After spending two days on the island of Lesvos, Raymon was brought by a fellow man in the port of Piraeus. He was immediately recruited to sell heroin in Victoria square, a central spot in downtown Athens, as a way to pay off his trafficking fees. Today Raymon is homeless and addicted to heroin himself. He no longer works for the network and has taken to begging on the streets to survive. He claims that the illegal drug trade is protected by corrupted police officials who inform local mafia on police raids and make sure that those arrested are released.
“Drug trade is divided in different zones with each one having its own police protection. In my area, a police lieutenant known as ‘Father’ was our focal point. He was making sure that police will not bother us”, he says.
Raymon claims that ‘Father’ had provided him with the personal number of a police officer at the local police department in Athens downtown, whom he could call in case of arrest. “In less than 20 minute I was back in the streets”, he says. Greek police, when asked to comment on the claims of police officers involved in drug related crimes, declined to answer.
Cases of corruption are not rare in Greek police forces. In November, a criminal network of 67 people involved in drug and arm trafficking on the island of Crete was dislocated by Greek authorities. Among those arrested were three police officers, two of them lieutenants that were acting as informants for the network. In early December, Greek authorities arrested seven more police officers that are allegedly part of a criminal drug trade network in mainland Greece.
There is a sense of abandon, when walking in downtown Athens today. Open drug use within a view of the nation’s parliament, an alarming surge in HIV infections and a total collapse of the health system and all safety nets are signs of a society that its priorities are out of balance.
Meanwhile, down on the streets, there is a feeling that Greece is unraveling as a modern state.
Follow Fragkiska Megaloudi on Twitter: www.twitter.com/Fran221175
This report was made in collaboration with photojournalist Dimitrios Bouras and is the result of extensive field work in the streets of Athens over the last two years.
*Names have changed to protect identities.