Karaiskos Gets Close To JLo 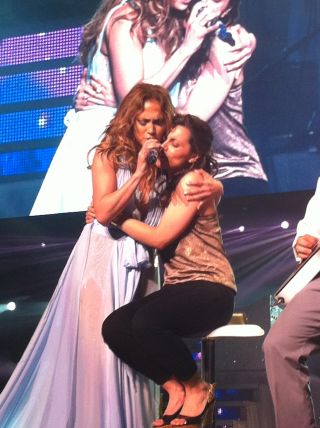 Esther Karaiskos finally had her dream come true. After 13 years of adoring singer and actress Jennifer Lopez, she managed to get up close and personal with her, when she was called on stage at the Rod Laver arena this month during J Lo’s tour of Australia.

The 24-year-old fan said Lopez noticed her going crazy while singing to all her songs, that half way through singing her first ever number one hit If You Had My Love, the singer actually asked Karaiskos to join her on stage and sing along.

“It was a real shock and didn’t expect it,” Karaiskos told Neos Kosmos. “I was quite shy on stage because I was that close with my idol. She kept hugging me and encouraging me when I got on stage, and I think it was a crowd pleaser everyone enjoyed it and i think she did as well.”

According to Karaiskos it was good old fashioned Greek kefi that got her noticed by her idol. “I had my hands in the air and was going crazy the whole night so I guess I stood out being Greek.”

But the story doesn’t end here given that the news has traveled to Greece with J Lo’s fans picking up on the story. Even Karaiskos’ cousins in Athens and Patras have seen footage of their Greek Australian cousin singing together with J Lo.

She said people in Greece have been contacting her via Twitter and Facebook asking what Lopez is like.”I felt like I’ve grown up with her and she’s a big part of who I am,” says Karaiskos when asked “Why J LO?”
“She came from the Bronx and she’s still Jenny from the Block yet she’s really classy; she started from humble beginnings and achieved her dreams and I like that.”
(Source, photo: Neos Kosmos)