The late Jimi Hendrix has often been named the world’s greatest guitarist, an elite acknowledgment given the stiff competition. But when asked by American reporters who his choice was, he surprised them by saying, “You believe I’m the best because you have not listened to Greek Manolis Hiotis playing his bouzouki.”

Hendrix first met Hiotis and his partner, singer Mary Linda, while they were on tour around the United States back in the 1960’s. Having attended one of Hiotis’ shows, Hendrix admitted he admired him and that he discussed with Hiotis about his playing technique.

Hendrix was Hiotis’ biggest backer even before then-U.S. President Lyndon Johnson invited Hiotis and Mary Linda to the White House to play on his birthday and offered them a Green Card for immigrants so they could stay in America as long as they wanted. 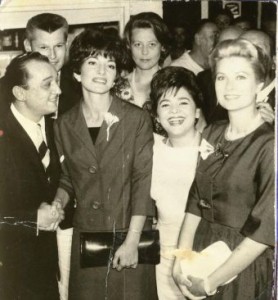 Hiotis had other successes. In the summer of 1961, he played for Aristotle Onassis and Maria Callas, Prince Rainier III of Monaco and Grace Kelly. Journalist Dimitris Liberopoulos, Onassis’ biographer, writes in his book  that when the two couples joined one of Hiotis’ shows in Athens, they asked to meet him in person to congratulate him.

Callas told Hiotis that she had been translating the lyrics of his songs to Princess Kelly all night long and the American actress loved them because “she is a woman in love.” At that moment, Kelly asked Hiotis what the difference between a bouzouki and an electric guitar is.

Hiotis’ answer was rather unexpected; “Mrs. Callas, please explain to Princess Kelly that the strings of an electric guitar are vibrated due to electricity while the strings of a bouzouki right by heart.”

Since the beginning of time, people have turned their eyes to the sky and discerned the shapes of animals and objects in the stars.
Animals