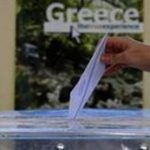 Greek Minister of Interior Euripidis Stylianidis said he is ready to put a bill before Parliament that would give Greeks around the world the right to vote in Greek elections, which could add several million eligible voters, according to the newspaper Greece Tomorrow.
Debate has long raged in Greece over extending the voting right and has become even more critical with the changing political landscape as the once-dominant parties of New Democracy and PASOK have been sliding in popularity. According to the draft bill the right to vote be extended to anyone around the world who has Greek citizenship, much the same way that Americans abroad are allowed to vote in U.S. elections.
The bill also would require that Greek political parties place as candidates on their lists at least three homogenous Greeks who have lived abroad for at least 10 years.

Greece ranks twice on a list of the top "secret beaches" in Europe featured in the latest edition of Travel + Leisure, a top travel magazine.
Greek News

An earthquake measuring 6.0 on the Richter scale shook central Greece near the town of Elassona at 12:16 local time on Wednesday.