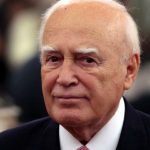 The Greek President’s salary is about to be halved under an amendment put forth in the Parliament, although it is moot for the current office holder, Karolos Papoulias, who has waived the monthly salary of 23,122 euros, some $30,351, plus the monthly expense allowance of 6,240 euros, or $8,191, for a combined total of $38,542.
The total annual compensation for the symbolic office, which has virtually no powers, is $462,504, more than U.S President Barack Obama’s annual salary of $400,000 plus a $50,000 annual expense account.
The Presidential position will now have a monthly salary of 11,561 euros, or $15,175 while the expense account will be eliminated. Papoulias cited the crushing economic crisis and ongoing austerity measures that have seen big pay cuts, tax hikes and slashed pensions for Greek citizens as the reason he decided to foregoe his salary and expenses.
Greek media reported that the idea to slash the President’s salary and benefits came from Papoulias, but he did not comment, although earlier this year he suggested the change. The change will save the government 350,000 euros, or nearly $460,000 a year.

The impressions had been made by hominids on Crete 5.6 million years ago, making them by far the oldest footprints ever discovered in Europe.
Greek News