GRNews
GreekReporter.comGreek NewsGreeks in Colombia: Immigrants for Love and Love for Entrepreneurism

Greeks in Colombia: Immigrants for Love and Love for Entrepreneurism 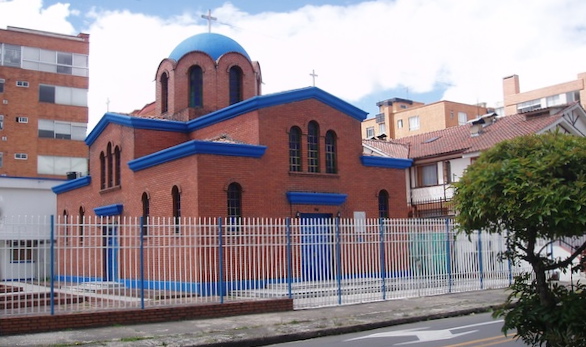 There are about 150 Greeks in Colombia today, but each one of them has an interesting story to tell, either of love, or entrepreneurship. Some of them have both as in the case of Mr. Dimosthenis Despoiniadis who went to Colombia following his Colombian wife but stayed in the country even after they parted ways to become the Greek with the most patents in the country.

Despiniadis is described by his fellow Greek-Colombians as the spirit of innovation. The many tech companies he has founded are the proof that this smart Greek thrives in Latin America.

“There were a lot of Jewish Greeks that came after the First World War to Colombia, the others came after the Second World War and then there are a lot of people who have been married with Colombians and this is how they came to the country,” says the honorary counsel.

And what a better guardian angel the Greeks could ask for than Mr. Barco, the brother of the former President of Colombia Virgilio Barco and a member of the powerful and beloved political family of the Barcos. Mr. Barco, a lawyer, loves Greece and admires the Greek civilization and as he told us he is looking forward to another trip to Greece this summer.

Some of the Greeks left Colombia during the years of insecurity caused by the cartels and Pablo Escobar in the 80’s and 90’s. Barco’s brother, Colombian President Virgilio Barco, was one of the worst chasers of Escobar.

However after the 90’s when Colombia became safer and started to do well economically, many Greeks came back and started innovative businesses.

Balalaika, one of the largest  underwear companies which is based in Medellin is owned by Takis Bersis. A Greek who came to Colombia for love following his wife, today has created an underwear company that can be found in every mall and market of Colombia.

Spiros Kongas is another example of Greek entrepreneurship in Colombia. Kongas is based in the second largest city of Colombia, Medellin. A few years ago he decided to make the Greek sugar-cookies (kourambiethes) famous in Colombia;thus, he created his first factory. His company, EL Greco, is a sweets manufacturer that among other products produces kourambiethes that can be found in almost every supermarket in Colombia. We tasted them and they have been the best kourambiethes we have ever eaten outside of Greece.

Thodoris (Teo) Lykos is the owner of one of the two Greek restaurants that exist in Bogota. Teo, whose family originates from the city of Istiaia on Evia Island, also came to Bogota after falling in love with a Colombian girl and just a month ago opened a Greek restaurant in which he plans to have Greek music nights “bouzoukia.” During the tough years of the Colombian drug wars, Teo was in Bogota and when the FARQ bombed Colombia’s Intelligence headquarters – one of the worst bomb explosions in Colombian history – he was across the street from the target.

“Things were tough here in the past. Many times our lives have been in danger and Colombia has come a long way from what it was in the 80’s,” says Thodoris, or Teo, as his Colombian friends call him.

“Today the country is safe and there is great growth and we are one of the best economies of Latin America, but I will never forget the explosion of the bomb at the Central Intelligence building.  I was a few meters away in a market when the bomb exploded,” remembers Teo.

Spiros Stathoulopoulos, is the Greek-Colombian who touched the subject of social unrest and terrorism in Colombia with his award winning movie PVC-1. Stathoulopoulos, one of the younger members of the community, today lives in Los Angeles and has become a well sought after talent. PVC-1  won an award in Cannes in 2009 and since then he has been making successful movies in his beloved Greece, Colombia and the USA . This year he released “Meteora,” a film that describes a love story of a Greek monk and a girl.  “Meteora” has received outstanding reviews and has also participated in many international film festivals such as the Berlinale in Germany. Stathoulopoulos is the son of Vassilios Stathoulopoulos, an ophthalmologist and his Colombian mother. They immigrated to Colombia after they fell in love in Greece.

And if you think you won’t find a good souvlaki in Bogota, that means that you have never visited the city. The most authentic Greek gyro – yes there are more gyro places in Colombia than you would imagine- is owned by Panagiotis Voidonikolas, a Greek-Colombian. His father, Petros, came from Messinia in Greece after he fell in love with his Colombian mother. Panagiotis wanted to make the Greek souvlaki so original that because he wasn’t satisfied with the pita he could find in the market, he decided to manufacture it himself at a friend’s factory. His gyro-place is called OPA and we definitely suggest you try a gyro there if you ever find yourself in Bogota.

Dimitris Christodoulopoulos is a pediatrician and the honorary Vice-Counsel who also immigrated to Colombia after he married a young woman from the country.

Another person who really cares for the community and brings people together is Georgia Kaltsidis, a literary scholar and translator who moved to Colombia after she visited the country for vacation and then she decided that she wanted to move there. Georgia has published a collection of Poetry in Greek and Spanish whose title is “Lambirismata – Destrellos.” A few years ago she was given the “Presbeira of Hellenism” Award by the State of Athens.

Yiannis Aleksiou is the architect of the Greek community. He came to Colombia for his wife, and today he is the director of the Architecture Department of the La Javeriana University in Bogota.

The Arvanitis family are the ones who built the first Greek-Orthodox church in Bogota. Christos Arvanitis has a factory that manufactures Christmas trees and today spends most of his time in Greece. His son Gerasimos is the one who operates the church today and is also in charge of the family business.

One of Colombia’s most beloved and famous artists, Fernando Botero, is also connected to the Greeks. Botero is married to Sophia Vari, a Greek sculptor, but they spend most of their time outside Colombia.

The Greeks of Colombia are not really organized in the sense that other Greek-American communities are, but all its members manage to keep in touch with each other and stay together.

“We get together officially at least two times a year, during the Greek Independence Day and the Oxi Day. We usually meet at the Greek church or at the El Bosce University whose Psychology Cosmitor is a great friend of the Greeks and always gives us the University’s hall for our functions,” says Mrs Kaltsidou.

If we take into account the similarities of the Latin and Mediterannean cultures, it’s surprising that there are no more than 150 Greeks in Colombia today, but probably the image of Colombia in the 90’s that wrongfully is still haunting the country has scared away foreigners.

A visit to today’ s Colombia will help you realize that the country has come a long way since the years of Escobar and safety is not an issue anymore. This safety is what drives the current growth of Colombia and gives people the ability to love, dream, and invent, as our Greek community does, blend in a society that has finally seen the light, politically and financially.