TechNews
GreekReporter.com Greece It is the 3rd Friday the 13th in Infamous 2012 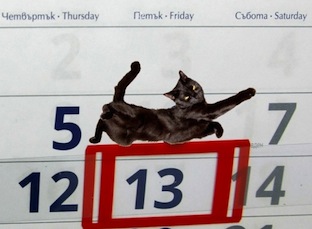 Today is Friday the 13th, a “fatal” date that occurs for the third time in year 2012, a year which has been filled with superstitions.
For the first time since 1984, those three Friday the 13ths — January 13, April 13 and July 13 — are exactly 13 weeks apart.
Three Friday the 13ths happen every few years. The last was in 2009, and the next is 2015. What’s special about 2012 — and what will not occur again until 2040 — is that this is happening during a leap year.
Friday the 13th is a real challenge to those prone to superstitions; they usually spend the day on the lookout for bad signs and omens and postpone trips. According to the Stress Management Center and Phobia Institute in Asheville, North Carolina, an estimated 17 to 21 million people in the United States are affected by a fear of this day.
There are conflicting studies about the risk of accidents on Friday the 13th.
The Dutch Center for Insurance Statistics (CVS) on June 12, 2008, stated that fewer accidents and reports of fire and theft occur when the 13th of the month falls on a Friday than on other Fridays, because people are preventatively more careful or just stay home.
A 1993 study in the British Medical Journal that compared the ratio of traffic accidents between Friday the 6th and Friday the 13th, stated that there is a significant increase in traffic-related accidents on Fridays the 13th.
The fear of Friday, the 13th has its own scientific name – paraskavedekatriaphobia, a word derived from the concatenation of the Greek words Paraskevi (meaning Friday), and dekatreis (meaning thirteen), attached to phobia (meaning fear).
According to folklorists, there is no written evidence for a “Friday the 13th” superstition before the 19th century; however, some folklore is passed on through oral traditions.
One theory states that it is a modern amalgamation of two older superstitions: that thirteen is an unlucky number and that Friday is an unlucky day.
In numerology, the number twelve is considered the number of completeness, as reflected in the twelve months of the year, twelve signs of the zodiac, twelve hours of the clock, twelve tribes of Israel, twelve Apostles of Jesus, twelve gods of Olympus, etc., whereas the number thirteen was considered irregular, transgressing this completeness.
There is also a superstition, thought by some to derive from the Last Supper or a Norse myth, that having thirteen people seated at a table will result in the death of one of the diners.
Friday has been considered an unlucky day at least since the 14th century’s The Canterbury Tales, and many other professions have regarded Friday as an unlucky day to undertake journeys or begin new projects. Black Friday has been associated with stock market crashes and other disasters since the 1800s. It has also been suggested that Friday was the day that Jesus was crucified.
On the other hand, another theory by author Charles Panati, one of the leading authorities on the subject of “Origins” maintains that the superstition can be traced back to ancient myth.
Others find the superstition’s origin in the year 1307, when on Friday, October 13, the French King Philip IV issued the order for the extermination of the Knights Templar, who have been accused of numerous sins, including witchcraft. The connection between the superstition and the Knights Templar was popularized in the 2003 novel The Da Vinci Code of author Dan Brown.
Recent research shows that people have become less and less superstitious and dependent on the falsely or rightfully accused Friday.
(source: novinite)