GRNews
GreekReporter.comGreek NewsEconomy“We Are Moving from Being a Western Country to a Third-World Country" 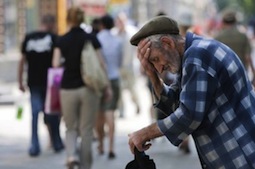 Extreme political uncertainty, rampant corruption, queues forming at soup kitchens, and aid from non-governmental organizations (NGOs)—all these are more commonly associated with countries still developing Western-style economies.
“We are moving from being a Western country to a poor country,” George Protopapas, national director of international charity SOS Children’s Villages, told CNBC.
“I’m worried that it’s going to be like Ceausescu’s Romania or Bulgaria in the early 1990s.”
Of course, the concept of the Third World, which dates from the Cold War, is dismissed by many as outdated. There is no universal concept for how to label developing and developed countries as development is not always a linear process.
What really differentiates Greece from struggling developing countries is its large, well-educated middle class and cultural identification with the West.
It’s difficult to sit in Syntagma Square—the central Athens square that is home to the Greek parliament, with its exclusive hotels and shops—and see Greece regressing. Yet many of the people in suits chatting on their iPhones have had their pay slashed in the past year, and there are few shops that are busy.
Greece itself, with its strange mixture of capitalism and socialism, was always one of the least developed of the European Union countries. There are many now who argue that it should never have been allowed to join the euro at all. It is often mentioned as the country where the foundations of modern democracy were laid millennia ago, yet ironically, its current democracy is less than four decades old.
Greece’s 20th-century development was notoriously hampered by political upheaval, including a fascist dictatorship, an army-led coup, and a period of occupation by Nazi Germany.  It is the memory of this too-recent occupation that is sparking opposition to the external forces such as the ones the Troika have been trying to implement into Greek policy.
After recent stringent cuts as part of the bailout, non-governmental organizations are providing some of the services like health, normally provided by the government. This kind of aid is much more often associated with the developing world. Diseases such as HIV and malaria are on the rise.
The medical charity Medecins du Monde — Doctors of the World — known for its work in the Third World, saw the number of Greeks coming to its clinics double in 2011.
“Many patients are retired elderly citizens whose pensions have been substantially reduced because of the austerity measures implemented by the government in recent years,” the charity noted in recent research. And such charities are paying taxes on donations for the first time, as well as facing rising costs across the board.
Immigrants from developing countries are starting to see more opportunities for prosperity in their home countries than in Greece.
Ade, who emigrated from Nigeria in 2005, is planning to go back home as soon as she can afford to.  “There’s nothing here for me anymore, and I can’t contribute to society if I can’t work,” she told CNBC as she waited for free medical treatment (she is four months pregnant) at a center funded by the Orthodox Church.
There are also concerns that the escalating cost of heat and electricity, the result of tax increases brought in by the government following the bailout, coupled with a rising number of unpaid invoices, could lead to power cuts.
Energy companies in Greece are already struggling. State-run PPC needs to pay $657.2 million (which it does not have in its coffers after recent falls in revenue) by June 22 or persuade its banks to roll over its debts. And people increasingly cannot pay their bills.
Close to a third of the Greek population — the highest level in Europe — was considered at risk for poverty or social exclusion by Eurostat in 2010, when the economic and political situation was not as dire as it now appears. And nearly 20 percent of Greek children live in homes unable to afford at least 3 out of 9 basic items.
“We are the band that’s still playing on the Titanic. We have to play on and keep working even though the ship is sinking,” Protopapas told CNBC about his charity, which helps struggling families and has seen a dramatic increase in calls for its help.
(source: CNBC, Capital)