Archbishop of Australia is Opposed to Gay Marriage 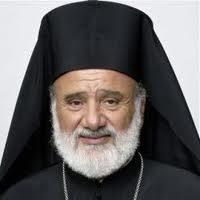 Archibishop of Australia Stylianos announced his view on same-sex marriages. More specifically, he stated that he is opposed to the act, as most archbishops across the world who have disapproved gay marriage, such as that of the Archdiocese of Thiateira and Great Britain.

This announcement came as a result of the decision of members of the Australian federal parliament to collect signs in order to recognize the same-sex marriages.

The Australian archdiocese reacted immediately to the issue by developing a special website devoted to the issue so that visitors and the media can understand the Church’s stance and so that that “the voice of church be heard.”

“We are not hostile to our fellow citizens who believe they are different,” stresses Archbishop of Australia and adds, “But if we change the traditional form of marriage between men and women, this is opposed to the holiness of the marriage and family, as we are taught by our Christian faith and our Greek Orthodox tradition.”

He also argued that the proposed legalization of  homosexual marriage threatens the institutions of  marriage and family but also the base of our society.

“In the face of such a possibility the Orthodox Church could not avoid expressing its opinion on the issue,” said Archbishop Stylianos.