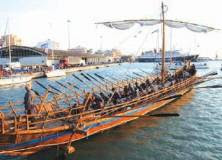 An Australian film production company plans to shoot a documentary about the myth of the Argonaut expedition. Big TV channels, such as British BBC, will broadcast the documentary.

The company David Adams Films has already ask the Municipality of Volos to support this production. The reason is that the ancient Greek Argonauts appear to have started their adventurous journey in search of the Golden Fleece from Volos harbour.

Moreover, a copy of the documentary will be given to the Municipality, in order to attract tourists, which may result in significant tourist promotion for the region.

David Adams Films crew will arrive in Volos on June 8 and shoot for 4-5 days. The departure of the Argo ship from Volos will be the first scene of the documentary. According to the ancient myth, there were 40-55 Argonauts on board. Most references choose to refer to 50, though. The Australian company asked for the contribution of the local rowers association “Argonauts 2008,” in order to participate in the film.

David Adams is a renowned documentary filmmaker and photojournalist with articles appearing in over fifty countries. He has been a war correspondent in Afghanistan and Georgia and has had a long-term association with The Sydney Morning Herald, as well as other popular Australian periodicals and television networks including ABC.