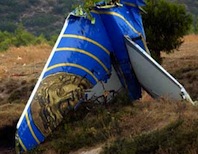 A Greek court sentenced four employees of Helios Airways, a defunct Cyprus budget carrier, on Friday for their part in a 2005 plane crash in which 121 people died after being deprived of oxygen.
The Athens court verdict came despite an earlier ruling by a Cyprus court which dismissed the negligence case brought against the company’s executives.
Former Helios Chief Executive Officer Demetris Pantazis, Operations Manager George Kikides, Chief pilot Ianko Stoimenov, and mechanic Alain Irwin were found guilty of manslaughter and sentenced to jail for 10 years.
The Athens court found the three executives guilty of allowing the Boeing 737-300, on a flight from Cyprus to Prague by way of Athens, to take off with an unfit replacement crew.
The mechanic was found guilty of failing to reset a pressure valve, causing both crew and passengers to pass out from lack of oxygen.
The plane flew for hours on automatic pilot before running out of fuel and crashing into a hill near Athens.
The Cyprus court ruled in December that state prosecutors had not proved their case for manslaughter.
The Greek verdict ”raises a serious legal case as it isn’t normal for the same people to be tried twice on the same charges,” one of the lawyers for the defense, Apostolos Fountas, told AFP.
(source: AFP)