Why We Dye Eggs Red for Easter 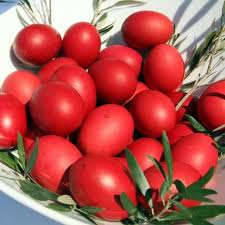 For Orthodox Christians, the egg symbolizes the empty rock tomb from which Jesus Christ arose after Ηis Crucifixion. It is a universal means of greeting and presentation for Christian believers, while it also foretells the eternal life experience awaiting true believers after death.
A symbol of fertility and immortality among all nations and eras of the human civilization, the egg appears to be empty within, but life spreads out of it when a bird hatches from it. According to heathen cosmogonies, the original chaos of the world was contained in an egg, which broke into two halves, the one forming the sky and the other the earth.
But why dye the eggs red during Easter?
Red is the color of life and victory. The custom of the Easter egg originated amongst the early Christians of Mesopotamia, who stained eggs red in memory of the precious blood of Christ, which was on the cross for the salvation of all men.
The Christian Church officially adopted the custom, regarding the red eggs as a symbol of the resurrection. Most stories link Mary Magdalene to the red Easter eggs custom, or other female figures.
Per Reverend Peter G. Kohanik’s book, “The Most Useful Knowledge for the Orthodox Russian-American Young People,” there exists a tradition which makes Mary Magdalene out to be the originator of the custom of using red eggs on Easter day. Magdalene went to Rome to preach the Gospel and appearing before the Emperor Tiberius, offered him a red egg, saying: CHRIST IS RISEN.” Tiberius, who was skeptical over the woman’s sayings, told Magdalene that if she was telling the truth, then his egg would turn red. At that point the egg had turned blood red, and so began her preaching.
Learning of this offering by Mary Magdalene, the early Christians imitated her, presenting each other with eggs. Hence, eggs began to be used by Christians in the earliest centuries as a symbol of the Resurrection of Christ and of the regeneration of Christians for a new and a better life along with it. The Russian monastery of Mary Magdalene in Jerusalem has a big fresco depicting her presenting the Roman Emperor with a red egg.
A second story has it that Virgin Mary offered the Roman soldiers guarding her Son a basket full of eggs so that they would treat him well. While she was pleading for him, her tears fell on the eggs and they turned red.
A variation of the story has it that an unknown woman, who wouldn’t believe the news of Christ’s resurrection, said that she would believe it only when the eggs she had been holding turned red; miraculously, the eggs changed as soon as she spoke the words.
The Greek Orthodox tradition wants eggs to be dyed red on Holy Thursday. People believe that these eggs can last 40 days outside the refrigerator without going bad. Moreover, if a priest blesses the Holy Thursday eggs on Easter Sunday, then these can last for a year without going bad.