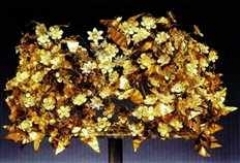 A temporary exhibition entitled “End to Antiquities Trafficking” will open in April at the Archaeological Museum of Thessaloniki. The exhibition will run until September and aims at highlighting the sensitive issue of antiquities smuggling by showcasing stolen artifacts that have been confiscated.
The exhibition will feature six sections with a total of 170 artifacts from the Museum’s collections, the 6th and 7th Ephorates of Prehistoric and Classical Antiquities and the Ephorate of Underwater Antiquities. Moreover, archive material from the Directorate for Protection of Cultural Heritage of the Tourism Ministry will also be on display.
“The Abduction of History” is the title of the first section of the exhibition, which will feature an overview of antiquities smuggling from antiquity to the present. 101 artifacts from recent antiquities smuggling activities will be featured in this section, most probably coming from an ancient cemetery of Macedonia.
The second section, titled “Antiquities without a Past”, will showcase two stolen and retrieved golden wreaths: a golden wreath from a Thessaloniki Aristotelion University (AUTH) excavation at the Vergina archaeological site, which belongs to the permanent collection of the Archaeological Museum of Pella, and a golden wreath returned by the J. Paul Getty Museum in Los Angeles in 2007.
“Lands without History” is the title of the third section featuring five stolen Cycladic statuettes that now belong to the Thessaloniki Archaeology Museum’s collections.
The fourth section “Nostos without Homecoming” showcases an ancient Macedonian bronze shield, a male statue, documents and photographs regarding the first restitution of a stolen Greek antiquity in 1946, and reports to the international conventions of the International Court of Justice and UNESCO.
Τhe fifth section titled “Forged Antiquity” will display 56 confiscated golden coins and will place emphasis on the economic dimension of antiquities trafficking and its linkage to global economic crime.
“Learn and Save-Time for Action” is the title of the last section of the exhibition, which showcases the various ways of protecting antiquities, the relevant legal framework, prevention, information and education of citizens on the protection of cultural heritage artifacts.