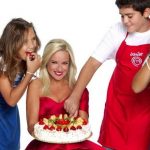 What do you think about food television today and competition shows like Master & Top Chef?

Well, lately, it seems that the channels are oriented in other directions, with programs of lesser quality. If you are willing to appear on screen and know about cooking, it seems that it doesn’t matter what format you use or what you actually say. So, channels are filled with different shows, not exactly what I would call cooking programs. It’s because of this bombardment by recipe channels, magazines and newspapers, that people often become misinformed and find it difficult to understand and distinguish which recipes are the best or most suitable.
As for the cooking game shows, I have considerable concerns over whether children of the age of ten or twelve who have no knowledge of basic cooking, should grapple with advanced gourmet dishes. For example, a talented painter must have previously studied art to improve his skills, just as a chef must first learn to cook the basics before attempting something more elaborate. Also, you may call me old-fashioned, but I also believe that a ten or twelve year old child should not be left to work with knives, electric mixers, hot stoves or various sharp tools which can put their lives in danger.
Do you think that family traditions and old Greek recipes are still being passed down in families, despite the trend for younger generations to eat fast-food? The love for cooking is timeless in every Greek household. Most Greek people don’t eat out of necessity, but out of enjoyment, as cooking can be creative and great fun, especially during festivities. Throughout the centuries, traditional recipes have passed down from grandmothers to daughters and then to granddaughters and even shared among friends and neighbors. Young people and new housewives have loved to experiment trying out new flavors and creating new dishes.
Of course things have changed considerably in recent years. Due to working mothers and busy schedules, families do not get the opportunity to sit around a table for family meals. A result of this is that teenagers have become addicted to junk food prepared in fast food restaurants. Yet, by continuing to have contact with women of every age and social class, I have found that they all show a true interest in searching for easy recipes so that they can prepare a tasty, nutritious and healthy meal for themselves and their families. They know that proper nutrition is tied to good health, thus they try very hard to keep to many of the traditional foods that are customary. A large number of families still manage to have a family meal around the table, at least on Sunday. I firmly believe that Greek women are among the few women in the world to cook and succeed in keeping the family tied to the institutions of the Greek tradition. I am also confident that the economic crisis will bring us all closer to home and our culture.
Finally Vefa, tell me what you are working on next, in terms of a book or maybe even a memoir?
At the moment, I am working on three more cookbooks; one for children, another for  a single person cooking and one for light cooking.