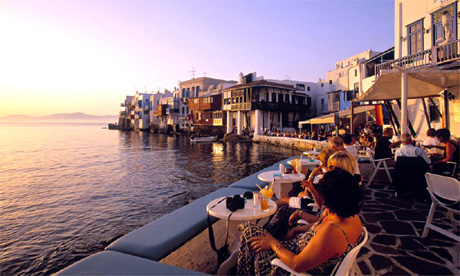 Russia is an important market for Greek tourism. The Greek tourism board expects a successful year, even if the country leaves the Euro zone.
The Association of Greek Tourism Companies (SETE) named the year 2011 the best year for tourism in Greece. According to their estimates, the total number of tourists coming to the country reached 16.5 million, with revenues exceeding the 2010 figures by 10%, which corresponds to 1% GDP growth. SETE expects this year to be successful as well and the results of 2012 to be even more impressive, reported Tourprom.ru.
Among the most prospective source markets is Russia. The Greek Tourism Board expects that the country will welcome more than 1 million Russian tourists in 2012. Last year brought a significant change in issuing entry visas for Russian tourists when the Greek consulate started issuing visas for multiple entries. This step was yet another stimulating factor for increasing the demand for tours to Greece.
However, in terms of promotion, some tourism stakeholders are quite critical of the tourism authority activities. “Last year the Greek National Tourism Board spent about 30 million Euros on tourism promotion. ‘Aegean Airlines’ spent 7 million Euros. I believe that the state support should be bigger,” said Dimitris Girogianis, Managing Director of Aegean Airlines.
Currently there is also the question of possible withdrawal of Greece from the Euro zone and a return to the drachma. However, according to the Greek tourism industry experts, in such a case the country would become a paradise for tourists and a popular budget destination since the local prices would decrease dramatically.
(source: SETE, tourism-review)