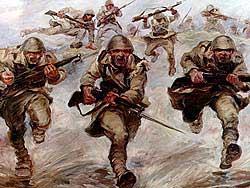 The Greek-American Washington Oxi Day Foundation organized an initiative to present The Oxi Day Story to China, and render the term “OXI!” synonymous with courageous action to defend freedom and democracy.

Following the First Annual Washington Oxi Day Foundation Celebration on October 27-28, 2011, the Chinese foundation for democracy Wei Jingsheng hosted the second celebrating event for Oxi Day and proclaimed that those who stand up for democracy and freedom “despite harassment and suppression…imprisonment and even sacrifice of precious lives…say `NO’ to the authority and dictatorship…they do not sell themselves, do not compromise, and do not bow to the dictatorship – because this is their only way of life, a noble way of life.”

The Chinese foundation featured the Oxi Day Story in the ceremony of its eighth annual “Wei Jingsheng Chinese Democracy Champion Prize”, which recognizes the individuals who contributed to the Chinese democracy movement.

“In Greece, there are three letters of the Greek alphabet with significant meaning — OXI.  On October 28 of every year, these three letters are celebrated and paraded, as Oxi Day (Ohi Day).  These three letters mean “no”, and represent supreme human dignity” read the beginning of the Story.