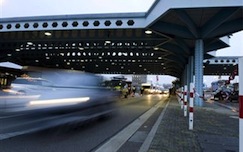 Commission proposal has been forwarded that allows the Member States of the Schengen Agreement to bring back border controls under strict conditions, in the case of mass entrance of illegal immigrants.

According to the existing law, a Member State of the area of Schengen can bring back border controls temporarily, only if there is a proven threat for public policy and safety.

In addition, Commission puts the implementation of this measure forward concerning the countries facing migratory pressure.

Nevertheless, the conditions set by the Commission regarding the shut of the borders are much stricter in comparison with those demanded by some countries, such as France and Italy.

In particular, a country threatened by a mass entrance of illegal immigrants can take a desicion itself concerning the return of border controls for a period of 5 days. Although, this country should also propose a reasoned report to the Commission, that it is essential to be approved by a qualified majority by the Council of Ministers.

In fact, Commission tries to restrict the unauthorized shut of borders by a Member State. This proposal is supposed to meet the opposition of the countries that were seeking for wider freedom of movement.