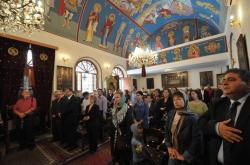 The historic church of St. George located in Libya, in Tripoli, dating back to 1647 was ransacked.  The church is the oldest Orthodox church in North Africa.

The president of the Greek community, Dimitris Anastassiou transferred the news to the Metropolitan of Tripoli Mr. Theophylaktos, who has been in Greece since late June.

“I am feeling heartbroken for what is happening in Libya, this beautiful country which was destroyed and whose people are noted for their hospitality,” stated Metropolitan of Tripoli, who settled in Libya in 1991.

”I was sad to hear the news from Mr. Anastassiou. The thieves stole the shrine of our patron saint which I had brought from Mount Athos.  Old Gospels, chalices, cherubim, censers, one of which we had been given by the Ecumenical Patriarch Bartholomew. Those who stole the holy objects contacted the president of the community and asked for money in order to return them. Mr. Anastassiou reported the incident to the police, but as things are at the moment, noone will deal with this matter,” he said.