GRNews
GreekReporter.comHollywoodAlki Did It Again! - First Assisted Suicide Broadcast Live Over the...

Alki Did It Again! – First Assisted Suicide Broadcast Live Over the Internet was a Promotion

Broadcast Live From the BattleCam website Eccentric Billionaire Alki David has paid for the Rights to Live Stream the Legal Assisted Suicide of a Terminally Sick Brain Cancer Patient on the website http://www.Battlecam.com/alkidavid 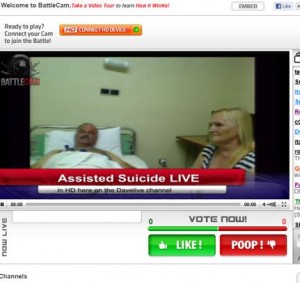 The above was a press release that fooled a lot of media and gave great exposure to Film on and Battlecam.com(this new article is updated live as it happens)

Should an assisted suicide be broadcast live over the internet? Owner of FilmOn.com and BattleCam.com, named Alki David, announced to the media that he would be broadcasting a live suicide on his website to a mass audience. The announcement draw to his website more that 150.ooo visitors during the supposedly live broadcast of the suicide.

This was partly a promotion stunt for his new websites, and a social joke. Alki is known for his provocative pranks and humor.

Was it fake? Before the assisted suicide was shown live on BattleCam.com, and when it was first suggested that it would take place, many thought it was an internet rumor or a joke. However, the promotion stunt fooled many, however, it did turn out to be nothing more than fake.

The video cut in, and people believed it was real. 30 seconds in to the video people were thinking, this isn’t real!? 30 seconds later, people knew it was nothing more than a publicity stunt.

Alki then had a short talk. He claims the man who was supposed to be the brain cancer patient was simply his Boat captain, the supposed wife of the patient was his house keeper, and the doctors were real. The location and setting of the prank we pre-recorded in Greece.

Shockwaves were sent around the internet. Should a live assisted suicide be profited from and provided as entertainment to a mass audience?

Mr Alki David said that this prank would bring many questions, however, it is clear this was another one of Alki Davids marketing stunts.