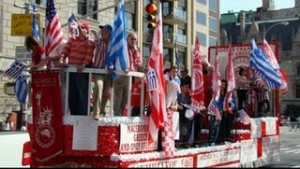 The Olympiakos’ supporters experienced emotional moments in New York, as the ”red n white” event that took place, was a great success, despite  the  absence of Vaggelis Marinakis (president of Olympiacos FC). Marinakis was prevented from attending the event, due to a delay with his flight  from  Heathrow Airport in London. His wife was awarded with the ”Nikos Goulandris” plaque during the ceremony while other female athletes of the association were also presented with plaques. Swimming athletes Skela and Chalkiti, were also given an award along with club people of New York, who gave the ”red and white mermaids” the sum of 8,000 dollars to support the Amateurs. Moreover, the two athletes were given a 1000 dollar offer from Mr.Aggeliadis.

The Greeks of New York expressed -for once more- their desire for Olympiacos to play a friendly match, so as to have the opportunity to watch their favourite team again, while Aggeliadis stressed that if such a move is organised, he will do his best to see it happen.