Criss Angel’s Brother, Magic, and His Passion for Classic Cars 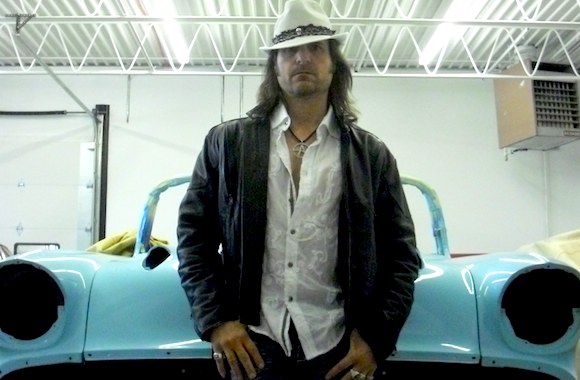 From a humble hard –working background the household of the Sarantakos’ family was built on a strict ethic. “Work hard and believe in the power of God and all is possible.” These are the words that were instilled into the three boys growing up in East Meadow, Long Island. The three boys were Christopher (now Criss Angel), Costa and JD Sarantakos. Each one of them is an avid auto, motorcycle and music lover.

Criss Angel and his brothers JD & Costa are now TV stars with the founding of the “MINDFREAK” has become a TV phenomenon. Originally JD was more drawn to music than anything else. In the late 80’s he owned three music stores in Long Island that stocked everything you can imagine for any music lover. His stores also offered an in-house music school with close to four hundred students per location.

Criss and Costa were lovers of music and studied the drums and the keyboards. They played in a few bands with JD when they were younger. Criss even played with “yours truly” back in the 80’s. JD was an avid guitar player and cut his first album in 1979. He offered his musical talents to all types of events including his local church.

JD first developed his love for music at the age of eight years old. His first instrument was the accordion which then transferred to the guitar that led him to master many other instruments. He did his first album at the age of eighteen in 1979 which he wrote and produced. From that point is when he opened his first musical retail store in 1989 in Levittown, Long Island. Then after many years of success he decided to sell the business around 2004 and focus on the show “MINDFREAK”.

Even though JD had a passion for music his true hobby was collecting vintage cars. The first classic “muscle” car was the 1974 Barracuda which his father purchased for him. The second classic car that his father agreed to buy him was a 1969 Corvette. But all this generosity was bestowed on him if JD did well in his studies. Hence, JD lived up to his end of the bargain. To this day he owes it all to his father who unfortunately passed away from stomach cancer thirteen years ago. His mother, wife Lynn and daughter Dimitra are still major supporters in everything he does.

Currently he is actually restoring that same 1969 Corvette at Revolution Motors Group in Long Island, N.Y. “Before I was eighteen I owned two classic cars. I was definitely blessed with great parents who have always been there for me.”

Even though he was never really mechanically inclined he always had an eye for classic rare cars. He has always done major research on which cars he was interested in making sure they are rare, and unique as possible. But between going back and forth to Las Vegas with the show “MINDFREAK” it side stepped him from his hobby. Yet that soon changed when his friend Gary Lockel, turned him on to it again.

He went on to host auctions and auto shows and is gearing up to host one of the largest auto shows in the country. The show is entitled the GM NATIONALS in Carlisle, PA in June. It will run from June 24th -26th. At the event JD will be unveiling five unique and rare cars from his collection. The restoration process is a long one and JD puts his trust in Revolution Motors with their expert staff. These cars will be restored to their original glory as they were built, off the showroom floor.

Besides Revolution Motors JD wants to thank PHOENIX AUTO INTERIORS of Long Island New York, who are restoring the interiors on these 5 cars and, Ken from HOUSE OF KOLORS who are both sponsoring JD at this event. In the last four years he collected at least thirty rare cars. In the Spring of 2011 he will be showcasing his cars at Revolution Motors every Wednesday night.

“These cars get a complete nut and bolt body off restoration. It is like your going back in time 40 or 60 year. It takes about a year and half to restore each car .”

The MINDFREAK show which has become a family event is a product of its success. His brother Criss Angel first acquired the “magic” bug when his Aunt Stella showed him a card trick. That card trick inspired him to follow his vision and dream to lead him to become and voted “the magician of the century”. JD not only became involved in the music but his music was incorporated in a couple of soundtracks.

In the beginning JD along with his brother Costa offered their services by putting the stages up and down and whatever else was needed to be done. For a few years in the beginning JD intertwined his music with Criss’ magic. JD at this point heads up the Criss Angel Merchandise Brand worldwide. The first TV shows were aired on other networks that finally lead to 6 seasons on A&E.

“At first it was difficult to get volunteers on the show because we were not known. We had to almost beg them to come on. But eventually with the success with A&E it took off.”

So far they have already shot six seasons, and are rumors about shooting season seven. They have developed at least a thousand CA branded items. Recently they have released “Criss Angel Magic Kits” to over 40 thousand outlets. If you visit Las Vegas you can see many cars and motorcycles that have been aired on A&E’s Hit show MINDFREAK that are on displayed at the Luxor Hotel. Criss Angel now has an AMAZING live show Called BELIEVE that can be seen appearing at the Luxor Hotel.

“Our roots play a large part in cultivating a character in developing a person. Our ethnic background is what makes us strong and we are proud to be Greek.”

JD is due to do some amazing things with his classic cars whether it be on the set of MINDFREAK or a car show. He is an unstoppable force as is the Sarantakos family. To learn more about the GM NATIONALS visit HYPERLINK “http://www.carsatcarlisle.com/ce/events/gm-nationals/” http://www.carsatcarlisle.com/ce/events/gm-nationals/ .