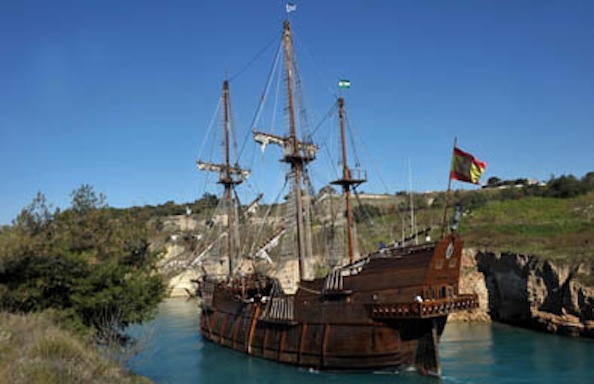 The Spanish “Galeon Andalucia”, a replica of the 17th century Spanish galleons, sailed through the Corinth Canal on Monday.
The 51-meter-long travelling museum, created by Spain’s Nao Victoria Foundation, makes use of ancient seafaring techniques with very minimal modern technology and virtually no fuel.
The Galeon Andalucia is a project conceived and developed by Fundacin Nao Victoria, an entity which came into being to preserve the only replica of the vessel that gave name to the Foundation, the Nao Victoria. It was the first vessel to circumnavigate the world, commanded by Captain Juan Sebastian el Cano in the 16th Century.
Built to ‘reminisce’ the trade path of the Spanish Galleon era, the “Andalucia” is an exact replica of the 17th century galleon ships from Spain that plied the Manila-Acapulco trade route, while even the furniture and decor were specially designed to keep the 17th century feel of the ship.
The 51-meter galleon replica was built by the Nao Victoria Foundation to serve as a travelling exhibit of Spanish civilization and culture.
Galleon Andalucia is mainly made of oak wood. It has 6 decks and 3 masts which support the manoeuvring of its 7 sails. The ship relies heavily on wind power and ancient navigational techniques during its voyages.
On the upper deck is a pair of huge anchors perched on each side of the ship, with each anchor weighing 1,450 kilograms.
Perched on the main deck is the main mast and replica cannons lined along the sides of the galleon.
The captain’s steering wheel and other navigational equipment, such as the ship’s compass, are on the upper navigational deck.
While sailing, Galleon Andalucia can develop a speed of 5 knots (about 10 kilometers) per hour.