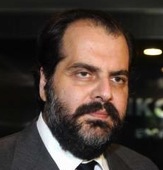 Panathinaikos have entered a fresh crisis as president Nikolas Pateras resigned on Monday and shareholder Andreas Vgenopoulos dissociated himself from club developments.
The aftermath of the 1-0 loss at home to Olympiakos Volou on Saturday and the fans’ pitch invasion was greater than expected, as Pateras tendered his resignation and proposed that board member Adamantios Polemis succeed him in the extraordinary meeting to be held on Thursday.
“Unfortunately in the light of the latest developments both in terms of relations with the hardcore fans and the intentions of other shareholders, I have realised that – especially as far as the latter is concerned – I have been left to my own devices in all fronts,” said Pateras in his letter of resignation.
With the other major shareholders, Thanassis Giannakopoulos and Yiannis Vardinoyiannis refusing to take the club’s reins, it remains unclear how Panathinaikos will emerge from this new crisis.
This was the second time in six months that Pateras has resigned.
Vgenopoulos and Pateras had come forward in early autumn answering the call of major shareholder Vardinoyiannis to assume a controlling stake in the club. This has not yet been implemented and looks highly unlikely at the moment.
(source: sport in greece)