GRNews
GreekReporter.comGreek NewsSeaburn is the Only Greek Bookstore in New York!

Seaburn is the Only Greek Bookstore in New York!

48- year-old owner Sam Chekwas is a Nigerian who feels Greek.  He is fluent in Greek.  He was a student in Nigeria, when he read the tragedy “Antigoni” in English. From then on he bacame a huge supporter of the Greek spirit. In the 1980’s he came to Greece to study and learn the Greek language. After becoming a dentist, he left Thessaloniki and travelled to America to meet his brothers. In 1992, he invented Seaburn publications. He has already published 120 Greek books, including an anthology entitled Salonica Press. In 1994, he inaugurated his bookstore which offers about 7,000 books. Who reads them? “They order them to me, and then I deliver them everywhere there is a Greek population.”, adds Sam. Recently there is a decline in selling books as they are very expensive in America. 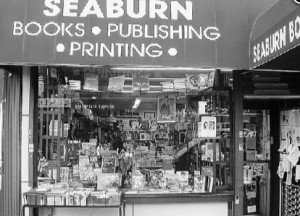 American youth does not know a lot about the Greek language or books. “Modern Greece has more to promote than feta or olives or even the great beaches. Greece has its books, which may be able to bring much money to the country if we promote it the right way and if there are good translations.” Sam Chekwas is the recipient of the prestigious Ambassador of Hellenism award in 2004.  The Greek government honored him in recognition for his contributions to Greek letters.

He now tries to promote the Greek language in every possible way. He has offered Greek lessons Greek for free.  Now he tries to convince others to teach their children Greek, as many English words originate from Greek.

Sam visits Greece twice a year: “I miss the traditional cafes, where they all drink their coffe while reading the newspaper and chat about politics.” Americans do not believe in Greece after the fiscal crisis, but Sam does. ” Greece will never fade away. However, we should learn from this crisis. The glory of Greece lays in its present not in the past. Greece still creates and offeres many things to all of us. We must support this effort.”, adds Sam.