Fereira has officially signed the contract with Panathinaikos 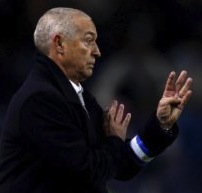 Since today Jesualdo Ferreira is the new coach of Greek champions Panathinaikos. He says he intends to help the club retain their championship crown.
Ferreira, 64, was sacked by Spanish outfit Malaga earlier this month after just nine La Liga matches in charge.
“The goal is to make Panathinaikos champions. We have the same number of points as Olympiacos, although we may be three behind because they have played one game less. But I would not have accepted this invitation if I did not want to fight for the title.”
No financial details of the deal were revealed by the team but local press reports said Ferreira would be receiving €700 000 for the duration of this season and another €1.3 million for next season.
“I’m very, very glad with the contract I signed with the president (Nikolas Pateras).
I’m very satisfied to come to Panathinaikos and my target is to do a good job here,” the 64-year-old Portuguese coach told reporters after officially joining the club.
Ferreira, who guided Porto to three Portuguese championships and two cups, will begin coaching on Sunday and will have to prepare the team for its Uefa Champions League match at home to Barcelona on Wednesday.