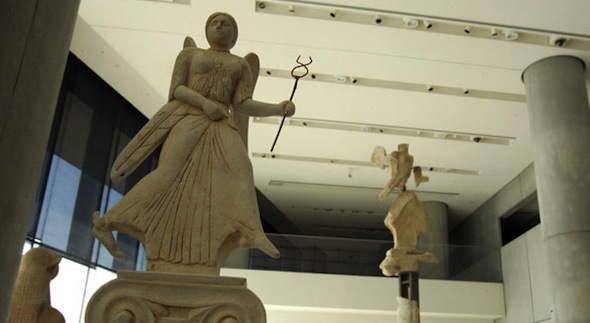 The Nike Monument  was unveiled in the new Acropolis Museum by Culture and Tourism Minister Pavlos Geroulanos.  The Monument was erected in honour of the ancient military commander Callimachus after the Battle of Marathon.  Its various surviving pieces have been reassembled for the first time in its true antiquity form.  In statements at the unveiling, Geroulanos emphasised the importance of the monument 2,500 years after the historic battle; an event broadly regarded as a pivotal moment in the history of European culture.
In 490 B.C. when the Battle of Marathon took place Callimachus was then a polemarch, i.e. supreme military commander of Athens. With the 10 Athenian generals evenly divided over fighting or surrendering to the Persian invasion force, it was he that cast the deciding vote that sent the Athenians into battle and on to their final victory over the Persian Empire.
“Everything now rests of you,” Geroulanos said, quoting directly from the description given by the ancient historian Herodotus of a hypothetical conversation between Callimachus and Miltiades.  Miltiades is the general that led the battle and earned Greeks their victory  just before the polemarch cast his vote.
“Today we are not unveiling the monument of just another general but a monument to a democratic process that changed the course of history,” the minister stressed.
Callimachus took part in the battle himself.  He led the right wing of the Greek army but was killed during battle. His statue was erected on the Athens Acropolis.
According to Prof. Dimitris Pantermalis who is the curator of the new Acropolis Museum, the monument has been reconstructed in a modern fashion.  The reconstruction method used only the original shards in their correct positions.
The remnants of the 4.68-metre monument have been affixed to a metal column that holds the various parts in place. It is built so that additional fragments might be attached if they are found. It is on display in the museum’s Archaic Monuments section.
A short distance from the Monument stands a copy showing archaeologists’ best estimate of what the monument might have looked like when it was intact.
The unveiling of the Nike Monument was among a series of events scheduled by the Culture and Tourism Ministry to celebrate the 2,500th anniversary of the Battle of Marathon.  It culminates in the holding of the 28th Classic Athens Marathon on Sunday where more than 20,000 athletes from all over the world will participate.
(source: ana-mpa)