GRNews
GreekReporter.comGreeceFernando Santos in line to take over Greece reins

Fernando Santos in line to take over Greece reins 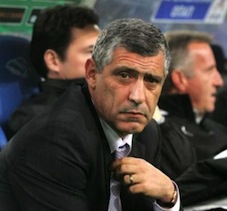 GREEKSOCCER.com
Early reports have indicated that Fernando Santos will take over as manager of the Greek National Team by 10 July.
The Hellenic Football Federation (EPO) confirmed earlier in the week that Otto Rehhagel had submitted his resignation as national team boss after Greece crashed out of the 2010 FIFA World Cup following a 2-0 defeat against Argentina.
Santos has long been rumoured to become the next Greece coach following a suspicious exit from his job as manager of PAOK FC following the club’s successful play-off run. Santos kept quiet about future plans, which had initially linked him with coaching positions in Greece and in his native Portugal.
Santos denied reports that he was the next to take up popular coaching positions in the Greek Super League including the then vacant coaching position at Olympiacos FC. Santos suggested that he had become tired with the “day-to-day pressures” that came with a coaching position on the club level.
The Greek press insisted Santos had alternate motives for quitting as PAOK bench-boss at such a crucial time for the club. Santos was linked with the national team job immediately and speculation only heightened with Rehhagel’s resignation earlier in the week.
Still, Santos has denied contact from the EPO, but reports on Thursday suggested that Santos will be offered a two-year contract worth 600, 000 euros per annum.
Santos has been praised by current national team players Giorgos Karagounis and Kostas Katsouranis, two players Santos has coached on the club level.
Greece’s next scheduled match is for August against Serbia in an international friendly with their Balkan rivals, the Ethniki’s final preparation before starting their qualifying campaign for EURO 2012 in a group that includes Croatia, Malta, Israel, Georgia, and Latvia.