TechNews
GreekReporter.com Hollywood Angelina Jolie Goes Greek as Cleopatra but Some Don't Like It 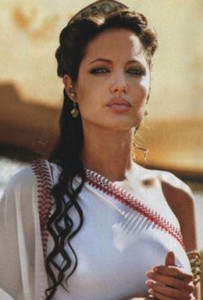 Hollywood has failed tremendously in representing minorities in prominent roles through out the history of cinema. This may be why people of African descent are speaking out against the casting of Jolie in the legendary Cleopatra role which they believe should go to an actress of color. An African American magazine, Essence.com, featured an article titled “Another White Actress to Play Cleopatra?” where the author writes, “Honestly, I don’t care how full Angelina Jolie’s lips are, how many African children she adopts, or how bronzed her skin will become for the film, I firmly believe this role should have gone to a Black woman.” Another source points out that the Egyptian royal has already been portrayed by three actresses who were not of color: actress Claudette Colbert in 1934, actress Vivien Leigh in 1945 and the most famous Cleopatra, Elizabeth Taylor in 1963

In response to this debate, the Greeks can offer another perspective on the matter.  To be historically accurate Cleopatra bore the ancient Egyptian title of pharaoh, however the Ptolemaic dynasty was Hellenistic, having been founded 300 years before by Ptolemy I Soter, a Macedonian Greek general of Alexander the Great. As such, Cleopatra’s language was the Greek spoken by the Hellenic aristocracy.

As a result of historical facts somebody could argue that the role of Cleopatra should not go to a woman of color or Angelina Jolie, but to an actress of Greek origin. A great candidate could be Greek-American Jennifer Aniston.

The new project is based on the biography “Cleopatra: A Life”.