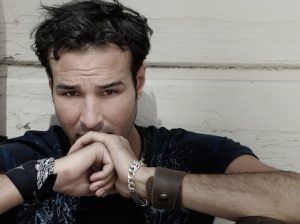 Impulsive, sharp witted and with a good sense of humor, George Katt (George Katsipoutis), a talented an upcoming Greek actor in Hollywood, talked us about his relationship with Greece, his projects, his experience having worked  with actors and also about his relationship with women. His first distinction was in 2007 when he received the award for Best Breakthrough Actor in the New York IndependentFilm Festival for his role Zeus, playing next to Danny Trejo (the famous actor in Tarantino’s and Rodriquez movies who is the protagonist also in the upcoming film, Machette). Today, he continues his successful course in Hollywood  having played recently in popular TV Series The Fugitive Chronicles.  Next, we will see him in a new thriller Stingy Jack playing alongside Jason Priestley and in other feature films coming soon.

How important for you was winning the award for “Best Breakthrough Actor” for the film “Valley of Angels”?
I wouldn’t say it was very important to me at all. I’m not the type of actor that got into the business for personal gratification, money, vanity or for any
sort of competitive purpose. I got into acting for the love and passion for it. Being awarded for something I’ve really worked hard at for many years is definitely a nice feeling and evokes flattery, but it’s not important to me. What is important is that I continue doing what I love to do and have some sort of longevity in this industry.

Υοu lived in Greece at the age of 10. Which are your most vivid memories from that period?
I lived in Greece at very young ages, 2 and 10, to be exact and both times were for short periods. But growing up I would be in Greece almost every summer for 2 months out of the year so Greece was a very big part of my childhood and growing up. I have many wonderful vivid memories of the
time I spent there. Greece is beautiful and the people there are warm, hospitable, friendly. They really know how to live life to the fullest. I love

Thessaloniki it’s an amazing city. I also loved experiencing the country life in Nea Halkidona where my grandparents had a farm and land. I remember picking cotton with them, herding sheep, milking cows, helping my grandparents and getting up at the crack of dawn with them to tend to the ‘xorafia’. Driving my grandfather’s tractor as they loaded hay onto the back. Those are some of my all time favorite memories. A lot of people don’t have the opportunity to experience life outside of one environment. I was blessed to have that. Greece holds a very special and important place in my heart and always will.

Have you come back since then? What are the things that you like most about Greece?
Unfortunately it has been way to long. A way overdue trip is much needed again. The beauty of Greece itself, the life there, the people, the sense of the
beginnings of civilization as we know it today… all of these things I like about Greece.

Tell us some of the most compelling challenges you had to face in order to become an actor.

There are many challenges to face. First and foremost, challenges within myself as a person. An actor’s tools are himself. His body, mind, spirit, language, physicality. If I am not 1,000 percent with myself I cannot move ahead. It’s constant personal work. Aside from this there are many, many challenges within
the industry. I have accepted rejection, I constantly work on patience, financial difficulties… there is never such a thing as ‘over night’ success.
That is all hullabaloo of trades and media. Having any sort of success or longevity in this career path requires a lot of struggle, courage, and spirit. It has been a long and tough road and it’s constant work.

How are the women in New York? Do you prefer them from the Greek women?
(laughing) Oh boy… will this get me in trouble by answering? I’ve been single for quite a bit after several unhealthy relationships in Los Angeles and have stayed focused on my work lately. I can’t really say about what I would prefer. I’m sure just like everything else there
are good ones and bad ones. I haven’t been to Greece in a while so I haven’t experienced meeting or dating any true Greek women from there. In NY I find it
very difficult to connect with Greek-American women. We usually don’t share the same qualities or ideas or most-importantly… passions. I think that may have to do with being an actor. I can’t say because I have yet to connect with anyone of interest in a long while. I’ll keep you posted though!(laughing)

How was it working with famous actors like Eric Roberts and Danny Trejo?
I was very young when I met and worked with Eric. It’s when I got my SAG card in a film he was in. I vividly remember that he was a very warm person with a
smile on his face and a professional.  Danny and I spent much time chatting in-between takes on “Valley ofAngels”. It’s funny, most people don’t realize these actors play the most dangerous and scariest characters but they are very sweet-hearted people. Danny was funny. Laughed a lot. Told me stories about working with Val Kilmer and on ‘Heat’ with De Niro. We talked about how he goes around speaking to younger kids about addiction. He was great. It was a lot of fun working with him. He would joke around and say I was upstaging him with my good looks and I would

say ‘what are you crazy?!’ (laughing)

You have been working in theater, films and television. Was it easy moving in different areas ? If you were to choose, what would you prefer the most?
It’s all very different. They are all different beasts. I love the stage. A lot of raw truth comes out on stage. It’s where you can actually find out if you can hold your own as an actor. I started on stage and feel those are my roots. I absolutely love film but it’s a completely different venue from theatre. Film is tricky because you are not always playing a character as he would naturally grow and change chronologically. It’s an intelligent process of being aware
when you are filming out of order as to where the character is emotionally at that time and place in the film and in the progression of the story. So you may be filming final scenes or climactic moments before the beginnings of the story or the development of his character. Film acting requires special technique in many ways. All of these venues require a lot of craft and experience. I don’t prefer one over the other. I just believe you do the best you can do with
anything that pertains to your work and to what you decide to give yourself too.

Tell us the most crazy thing you have ever done.
Let’s not even go there (laughing).

What do you despise the most?
Hate. Intentional malice. Money-oriented people and companies. Anything
associated with what I like to call ‘the big machine’.

What is your motto?
Carpe Diem. Courage and Spirit. Those motifs are both tattooed on my arms.

If you were to start your life all over again, is there something you would have done differently?
Oh yes. Many, many things. But that comes from growth and experience. I have no regrets per say. I realize that we go through things for a reason. It’s what we take from it and what we do with this growth after that counts.

What are your future plans?
I’m in talks about directing several different things. I have some new ideas for my own projects. I’ve been getting heavily involved in the behind-the-scenes
aspects of this business. I have plans but no expectations. We wish you all the best in your future work.