GRNews
GreekReporter.comHollywoodAnnet Artani Reaching Stardom One Note at a Time

Annet Artani Reaching Stardom One Note at a Time

As a young girl Annet was always attracted to the sound of music and the passion that derived from it.
She took that passion and merely multiplied it with her own and developed into a chart breaking recording artist. Her family who came from the scenic island of Kefalonia were already entrenched in the wonder of music. Her father and mother filled the house with music on a daily basis.

Annet caught the musical itch at a young age and along with her sister Diana joined a band called Nootropia where they sang in Greek. The group developed a following in New York and were even promoted on National Greek TV (NGTV) and Aktina FM. But that did not last long and Annet soon set her sights on bigger things.

Annet always had a huge love affair with R&B and club music. “I remember when I was real young I would wake up late at night just to catch Janet Jackson at the AMA. I would sneak to watch it when I knew my parents did not approve of us staying up late. My mother would yell at me to turn off the TV but that image of Janet on that stage I knew I belonged there.”

She would soon go on to receive a scholarship from BMG for writing and performing an original song, called “Summer Days”. Annet did not stop there she went on to win several talent titles in America’s Favorite Pageants, the New York Star Pageant and the Ophelia Devoure Talent Connection. She also managed to be feature in the Pageantry and Billboard Magazine.

When she entered the Ophelia Devoure Talent Connection she as the only white contestant every other contestant was African-American. The judges and the majority of the audience were African-American excluding Annet’s forty family members. “It was an odd experience. We even caught someone on video saying “that white girl better win” who was someone else’s supporter. I thought there was no way I can win. But my parents realized that I belonged on a stage.”

Annet also offered her voice in her college Gospel choir. She took her first step into her career as an opening act for Mando a Greek pop star, and was featured in her own summer concert in 1995. Annet made some more strides by collaborating with several accomplished writers like: Jeff Franzel, who’s written for NSYNC, Alex Forbes who has written for Taylor Dayne and Cyndi Lauper, among others. Annet was so much in everyone’s face singing at the Bitter End and CBGB’s. She was her own promoter. That is how Britney’s people found out about her.

Annet then went on to be a backup singer with rising pop star Britney Spears on her tour Dream Within A Dream Tour. Following that great accomplishment she then collaborated with Spears, co-writing the single “Everytime”. The single was soon released in 2004 and became an international top ten hit. “Working with Britney was definitely an eye-opener into how warped it all is sometimes. She would see a bikini in a store and say I like that and the next minute you know they would send forty of them to her room. It is a fine line between what’s real and what is not.”

Then as she was enjoying her success with Britney the homeland beckoned her presence on the reality show “Fame Story” in Greece. Yet she ended up walking off the show due pressure from the producers. She eventually signed a recoding contract with Virus Music which released her first single “Goodbye Amor”. “My album was mostly in Greek but there were some American songs. It gave me the opportunity to sign with Virus and release the album “Mia Foni”.” 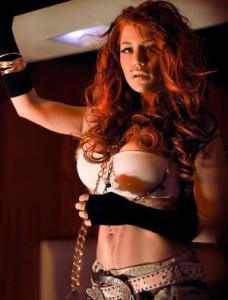 While she was enjoying the fruits of her labor she was cordially invited by Cyprus Broadcasting Corporation to take part in the Cypriot selection show for the Eurovision Song Contest 2006. After that was introduced the people chose a single out of twenty songs during the final round. The song was from a show entitled “A Song For Europe”. She won the majority of the votes for her ballad “Why Angel’s Cry”, even though she was suffering from laryngitis.

Since she was suffering from laryngitis the song was enhanced a touch by adding the Russian philharmonic in its orchestration. Annet then went on to represent Cyprus in Athens at the Contest’s semi-final.

Eventually this opened the doors to other possibilities. Annet was soon approached by the Greece’s Hellenic Radio & Television to represent them in the Eurovision Song Contest 2008. She developed three possible candidate songs, yet she realized early on that for her to submit them there would be strings attached. At this time she had already left her Greek record label Virus and signed on with an American label, Ultra Records. She knew by submitting the songs she would be tied to the Greek label restricting her to move on to greater pastures in the US.

She has currently released her first single under Ultra Records, entitled “Alive” a single that cuts close to home for Annet. “It was something that meant a lot to me. I came back from Greece with emotional scars from a failed relationship and this song reflects those feelings. I wanted to come back stronger here in America. I was nervous to come out like this in my video being it was so personal but I felt it needed to be done to expose the hardship of domestic abuse. But it also allowed me to feel liberated from that as well.”

Recently, Annet performed at her first US concert the Party 105 Mega Jam this past August where she brought the house down. “It was exciting and fun to get that exposure to a younger crowd. I love being out there on stage no matter where it is. I was able to project my dancing and singing together.”

Currently, she is working on her second single and developing her band to bigger and better things. Annet also fancies herself as a trend setter with her fashions. She always tries to come out with colorful dresses or styles that make a statement. “I think of myself as a cartoon character. I think of myself like Elmira from Tiny Tunes who is an animal lover just like me. I also did a little stand up comedy. I consider myself very colorful. I am slowly coming out into who I am what I can do. What I want to do more than anything is to sell out Wembley and do it on my own and make things happen for me.”