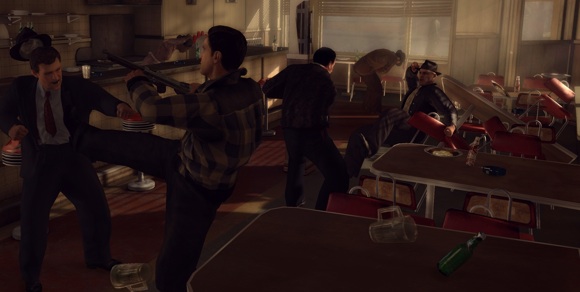 On the rough plains of the western town of Houston, Texas where cowboys and Indians can be found a lone immigrant immerged as a leading criminal mind. His name was Andreas Kouvalakis. Andreas brought with him an age-old society from the scenic island of Patmos, affectionately named the “ Oikoyennia” ( The Family) dating back to the 1800s.

The society whose roots are vague was brought over to the New World in the late 1800s as a form of a Men’s club. Yet it turned out to be no different than any other organized criminal element. Andreas, first set up his business in restaurants that offered bootleg liquor and gambling. In the early 1900s Andreas began to create a secret society without any interference from the traditional mafia. Andreas received some guidance on setting up in America by the then New York Greek boss, Pericles Diamantopoulos who also introduced Andrea to his future wife.

He eventually managed to surround himself with loyal “adelfia” ( soldiers) who controlled mostly all of Houston’s everyday workings. Andreas’ right hand man was Nassos Papaspiratos, who built an unbreakable wall of power that could rival any New York operation. Nassos a mastermind when it came to criminal schemes set up gambling dens and political connections. This kind of power base permitted the organization to flourish till its downfall in the early 1980s. Nassos was to Andreas as was Gus Alex to Al Capone.

Nassos and Andreas were strongly supported by their crew of adelfia: Anthony Hadzimenos, Vasili Krifakis, Theodore Manolakis, Manolis Tsiklou, Strato Kleftoulas, Mihali Vergoitis and others. As the years passed and the society prospered Andreas decided to hand over his title of “patera” ( Father) to his son Dino. Through intimidation and violence they monopolized on every facet of Houston’s lifestyle. Even though the organization committed every sin under the sun they were all devoted churchgoers.

For every member donated large sums of money to the cultivation of the church. Dino even held his meetings in the church to avoid FBI surveillance. Dino was a paper cut out of his father due to his loyalty and strong convictions when it came to the society. Yet he accomplished what his father dreamed of doing. He infiltrated the political machine by gaining a seat in City Hall.

Dino became the Mayors controller in the mid 60’s. His father’s dream was to fill City Hall with as many Oikoyennia members as possible. That dream came to a screeching halt after the reelections. Yet, Dino and his adelfia soon found another avenue to exploit. The strip clubs started to become an open market. Dino did not let this opportunity pass him by. The Greek underworld was the first to set up an adult club in Houston. The club Dino opened was named Vieux Carre’ Men’s Club.

To this day most of the clubs are owned and operated by Greeks. The Oikoyennia, similar as it was in structure of the traditional mafia, had few rules. On one occasion a gambling den run by Dino came under attack by State Rangers. Dino along with his adelfia were cornered instead of going peacefully they opened fire. A gun battle ensued which left four Ragners dead and one of the adelfia. In the Italian mafia it is outlawed to gun down an officer.

The fall of the Oikoyennia in the early 80s was due to an informant close to the patera. The informant was non other than Dino’s son Andrew. According to FBI documents Andrew detailed the structure of and the history of the secret society. His testimony crippled the Greek mob. Yet the soul of the society lingers within every adult club along the southern belt , thanks to the marketing genius of Dino Kouvalakis.

Meet the Greek-American Who Makes Art Using the Sun