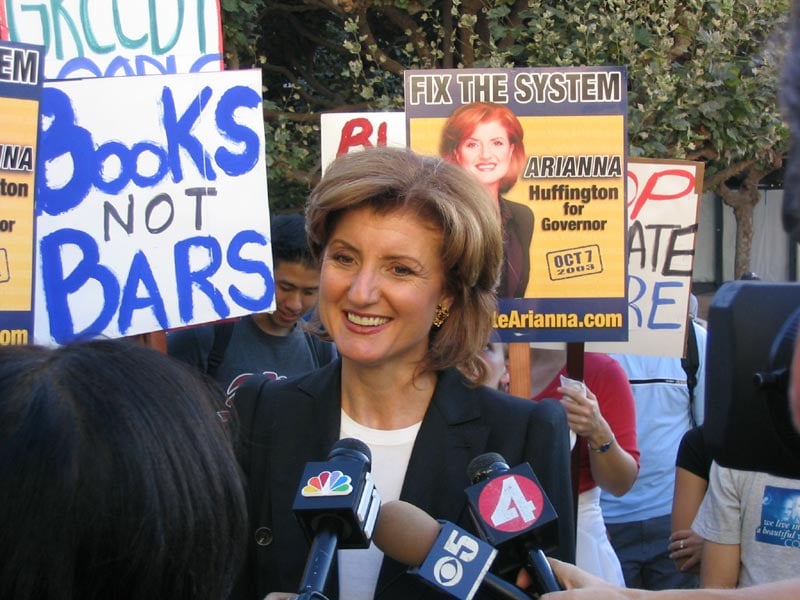 While being a woman with a thick foreign accent may intimidate most from a career as a political commentator in the U.S., Arianna Huffington does not let that hold her back, which is evident when she appears on shows like CNN’s Larry King Live and HBO’s Real Time with Bill Maher. The author of 12 books, a syndicated columnist, and the creator of The Huffington Post political blog knows she must put her fear aside to stand up for what she believes in.
She was born Arianna Stassinopoulos in Athens in 1950. As a young woman, she attended Cambridge University in England, and encountered ridicule and criticism due to her heavy Greek accent while debating in the famed Cambridge Union Society. As a result, she learned to speak fearlessly in public and became the president of Cambridge Union in 1971. She graduated with a Master’s degree in Economics in 1972.
She started writing books soon after including biographies on Maria Callas and Pablo Picasso. She lived in London and was involved with Bernard Levin, a columnist for the London Times, until 1980 when she moved to the United States.
Her latest book, Right Is Wrong: How the Lunatic Fringe Hijacked America, Shredded the Constitution, and Made Us All Less Safe published in 2008, cements her transition from a political conservative to a liberal. In 1986, she married oil millionaire Michael Huffington who was elected to Congress in 1992 as a Republican from California. She campaigned for her husband in the early 1990s supporting the Republican stance on most issues. However, after their divorce in 1997, Arianna, who kept her married name, started leaning more toward the political left.
In 2003, she ran as an independent candidate against Arnold Schwarzeneeger to replace California Governer Gray Davis in the recall election, but dropped out of the race just a week before the election. In 2004, she published a book called Pigs at the Trough: How Corporate Greed and Political Corruption Are Undermining America, which attacked the wealthy CEOs of American companies. She describes herself as a “former right-winger who has evolved into a compassionate and progressive populist.”
Over the years, Huffington has appeared on several radio and television talk shows. She was a co-host of the NPR program, Left, Right & Center. She currently co-hosts the radio show, 7 Days in America, on Air America Radio with Mark Green.
Her liberal blog, The Huffington Post, was launched in 2005 as a news and commentary outlet and features postings from a number of prominent journalists, public officials, and celebrities. It is considered one of the most influential political blogs in the world. Huffington and her co-founder, former AOL executive Kenneth Lerer, recently announced that they will be launching “HuffPost Green”, a site division specific to environmental or “green” content.
In her recent book, On Becoming Fearless …in Love, Work and Life, Huffington says that too many women sacriice their personal truth so they won’t “rock the boat.” She hopes to instill in her two teenage daughters how to overcome fear and become ambitious and assertive, which she was inspired to do herself by her own mother. In 2006, she was named to the “Time 100”, Time Magazine’s list of the world’s 100 most influential people.