On April 10, 1826 and after a year of siege, the 10,500 Missolonghi inhabitants made the heroic “Exodus of Missolonghi,” adding another brilliant page to the Greek War of Independence history.

It was April 15, 1825, three years after the failed attempt to occupy Missolonghi, that the Ottoman armies returned to besiege the city that had become the seat of the Senate of Western Continental Greece.

The army of Resid Mehmed Pasha, or Kioutachis, as Greeks called him, numbering 20,000 men, began the second siege of the city, later to be joined by another 10,000 men under Ibrahim Pasha, who arrived from the Peloponnese campaign.

The siege of the city can be divided into two periods: the first period is that from April 15th to December 12, 1825 while the second period spans from December 25, 1825 to April 10, 1826. Without significant help from the rest of the Greeks due to the civil war and having to cope with superior enemy forces, the Missolonghi residents were able to resist for a whole year.

The fortress of the city after the first siege had been restored and fortified following the efforts of Alexandros Mavrokordatos, the great philhellene Lord Byron, and engineer Michail Kokkinis.

Its trench was now deeper and the courtyard was reinforced with towers on which several cannons had been placed. The islet of Vassiladi between the lagoon and the sea became a kind of advanced fortress. There were six guns and 2,000 women and children who were gathered so as not to burden the city guard.

Within Missolonghi there were 10,000 residents, including 4,000 men, excellent warriors from Epirus and Aitoloakarnania, and another 1,000 men capable of managing weapons. 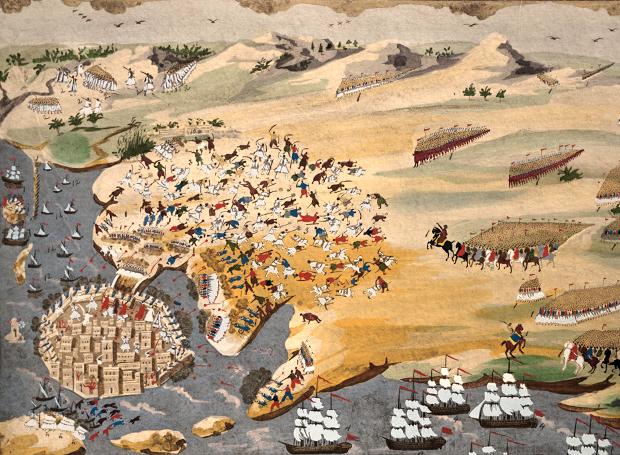 During the first phase of the siege (April 15 to December 12, 1825) Missolonghi was besieged only by the forces of Kioutachis, and their attacks were easily repelled. The siege from the sea was not strong enough and was repeatedly disrupted by Andreas Miaoulis’ fleet which supplied the besieged citizens with munition and food.

On July 24th, 1,000 Russian soldiers under Georgios Karaiskakis forced the Ottomans to withdraw their forces to the foot of Mount Zygos, relieving the siege of Missolonghi. The Turkish fleet, being harassed by the Greek boats, was forced to seek shelter in English-ruled Kefalonia.

On August 5th, Kitsos Tzavellas, head of a group of fighters from Souli, entered the city, raising the morale of the besieged. However, at the beginning of November, a fleet of Ottomans  and Egyptians brought 8,000 Egyptian soldiers to the siege, and a month later, the army of Ibrahim Pasha came to the region.

At the time, Ibrahim’s army numbered 25,000 troops, comprised of Ottomans, Egyptians, and Albanians. They were commanded by French officers and had modern artillery at their disposal.

Second face of siege of Missolonghi

It was December 25, 1825 when the second phase of the siege began. The two generals of the Ottoman forces were in disagreement, and Ibrahim attacked the city first. On January 16, 1826; Ibrahim admitted his failure in conquering the city and was forced to cooperate with Kioutachis.

The two armies had stunned the besieged Greeks with a ruthless bombardment. They managed to dominate the strategically important islets of Vassiladi (February 25th) and Kleisovas (March 25th). After the fall of the two islets, the situation for the besieged became desperate, as Miaoulis and his ships could no longer bring supplies to the city.

Missolonghi was now without food. Soon, they were forced to eat seaweed, mice, and cats. Under the circumstances, it was impossible for the city to defend itself. On April 6th, the board of chieftains decided to make the exodus at midnight on the Saturday of Lazarus through the dawn of Palm Sunday (April 9th to April 10th).

At midnight, according to plan, they were divided into three groups under Dimitrios Makris, Notis Botsaris, and Kitsos Tzavelas in the hope of breaking enemy lines and taking the enemy by surprise. Earlier, they had killed all Ottoman prisoners while only the wounded and the very old would remained in the city. 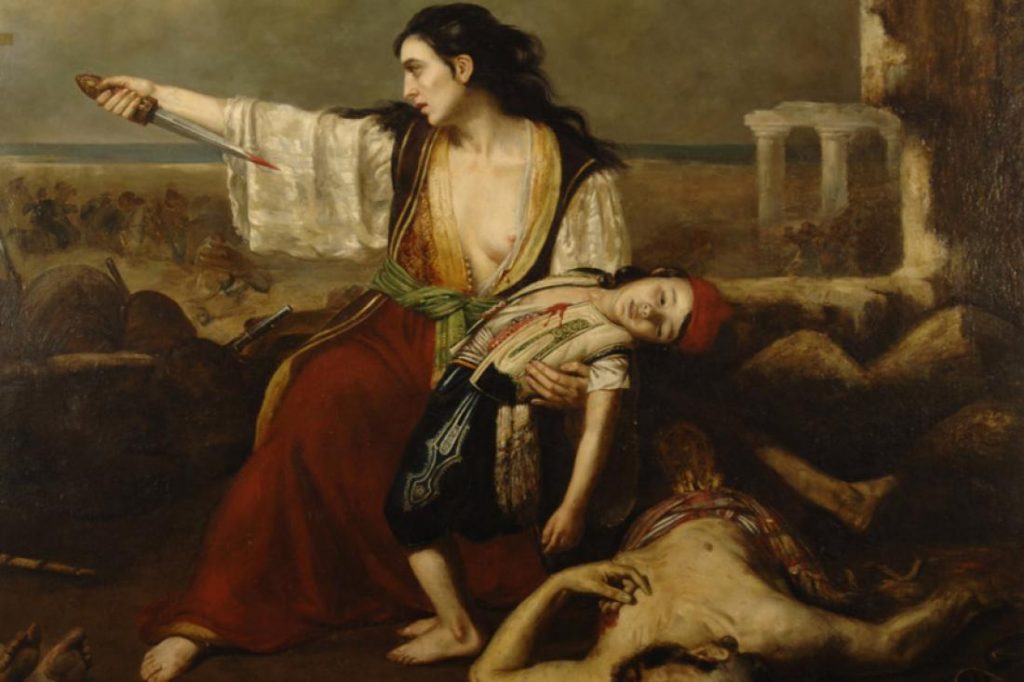 However, the plan was not properly executed or there was a traitor who betrayed the scheme to the Ottomans. Ibrahim’s forces slaughtered the Greek freedom fighters who fought against all odds. Meanwhile, the enemy forces had invaded the city and killed everyone who was left behind.

It is estimated that 3,000 Greek men were killed during the Exodus of Missolonghi. The 6,000 women and children of the city were taken as slaves and sold to the slave markets of Constantinople and Alexandria. The Ottoman-Egyptian casualties amounted to 5,000 men.

The Ottoman victory proved to be Pyrrhic as the barbarity of Ibrahim’s troops and the heroism of the Greeks generated a new wave of philhellenism throughout Europe.
Missolonghi was liberated on May 11, 1829. In 1937, it was recognized as “Holy City” due to the mass slaughter of its citizens, and Palm Sunday was designated as the anniversary of the Exodus.