TechNews
GreekReporter.com Greece Father Dimitrios: The Orthodox Monk Who was a British Spy 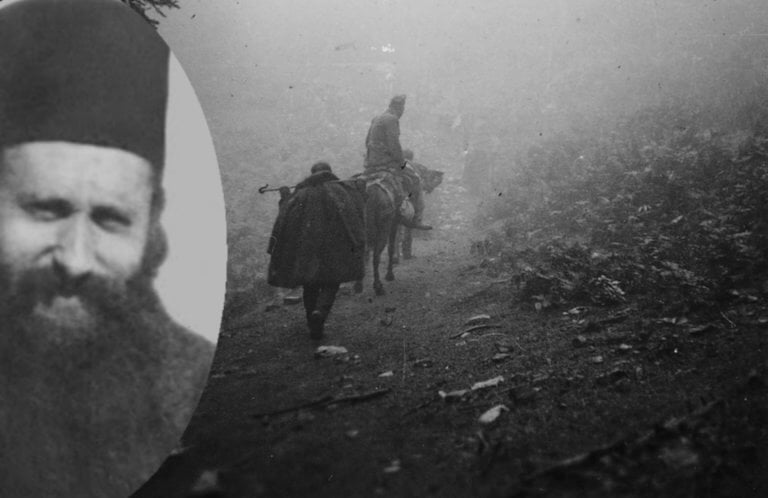 The story of Father Dimitrios, the monk with the voice of an angel, who turned out to be a spy for the British Intelligence Service in pre-World War II Greece, is a fascinating yet relatively unknown chapter in modern Greek history.
And that’s a shame, because the mission and wartime actions of the British priest could make a nail-biting spy novel, or even a film.
Born into a wealthy British family on January 20, 1903, David Balfour studied at the universities of Prague, Salzburg, Rome, and later, of Athens. He was a true polyglot, speaking English, French, Italian, German, Russian, Polish and Greek, and later even learning Turkish.
He was the perfect young man for Britain to recruit into their Secret Service.
Balfour, originally a Catholic, found himself becoming fascinated with the Orthodox Church. To satisfy his interest in Orthodoxy, he traveled to the Russian monastery of St. Panteleimon on Mt. Athos in 1932.
His stay there, and the great influence of Monk Sophrony (whose real surname was Sakharov) made him abandon Catholicism and become Orthodox.
Balfour then joined the Moscow Patriarchate and was ordained as a priest, taking the name of Father Demetrios, in the Three Hierarchs Church in Paris. In 1934 he was sent to London to liaise with a group of English Orthodox in a failed attempt to set up an Orthodox parish there.
The young priest returned to Mount Athos in 1935 and stayed in a remote hermitage. One year later, Chrysanthos, the Archbishop of Athens, placed Demetrios in the Penteli Monastery, enrolling him in the Theological School. He then granted him the parish of the little church in the courtyard of Evangelismos Hospital in Kolonaki, in central Athens.
Father Dimitrios becomes a sought-after confessor of rich Athenians
From the very first moment that Father Dimitrios arrived in Athens, he was sought after by all the wealthy families who lived in the capital. His sermons, and his chanting in the church in Athens’ richest neighborhood, became very popular.
His worn-out robe, his sweet voice, his philanthropic work, his education, his calm demeanor — and his eccentric, forked beard — made him the most famous priest in Athens. And the awe that Mount Athos’ monks inspire was perhaps what made him most beloved to his flock.
Father Dimitrios’ Greek language skills were perfected during his stay in Athens. He was often invited into high society parlors and he became the confessor to many prominent Athenians. He was invited into the homes, among many others, of General Alexandros Papagos and Prime Minister Alexandros Koryzis.
The British priest also taught at the British Institute of Athens, giving English lessons to wealthy Greeks. He soon developed friendly relations with members of the “Zoe” school of theologians as well as the Archbishop of Athens.
From 1937 to 1939, the English spy, wearing his priest’s robes and his long, bifurcated beard, performed his ecclesiastical duties close to Greece’s royal family. His relations with King George II, the successor to King Paul and Princess Frederica, were very close. His access to the royal palace undoubtedly gave him access to valuable information.
British Intelligence must have learned a great deal about the Greek royal family during these crucial prewar years. King George II was a paternal first cousin of Queen Elizabeth’s husband, Prince Philip, the Duke of Edinburgh.
Members of the royal family often confessed to their beloved priest. At the same time, Balfour, under the cover of Father Demetrios, forged important acquaintances with high-ranking military officers and politicians, with the blessings of the palace.
During the Greek-Italian War, Father Dimitrios surpassed every other Greek priest in his support of the Greek troops fighting in Albania, and his assistance to their families.

The beloved priest sheds his robe and beard and puts on khakis
Legend has it that just days prior to the Germans entering Athens as conquerors in April of 1941, his parishioners saw Father Demitrios coming out of his church with his hair cut short, clean-shaven, wearing khaki shorts and army boots.
He jumped into a jeep belonging to the English expeditionary force which took off in the direction of the port of Piraeus along with British embassy staff.
His ultimate destination was Cairo, where King George II, with a select Greek army unit, had fled before the Nazis took over in Athens. He was now David Balfour, a prominent British diplomat and a top member of the British Intelligence Service. Balfour continued his warm relationships in Cairo with the Greek royals as well as the future prime ministers Georgios Papandreou and Panagiotis Kanellopoulos.
Three and a half years later, after Greece’s liberation, Balfour returned to Athens just after the last Germans left. Now known publicly as “Major David Balfour,” he began work officially at the British Embassy.
According to historian Sarantos Kargakos, the Greek people who saw the person they knew as Father Dimitrios return as a British official were understandably extraordinarily angry at him, no doubt feeling a deep betrayal.
Despite this, Balfour continued his work to establish British influence in Greek politics after the war. This time, he did so from the post of “Advisor for Political Affairs” in the British Embassy.
Balfour’s influence and intervention was a matter of great discussion for historians, with scholars attributing several political actions and machinations to him. It is said that he was instrumental in putting Archbishop Damaskinos in the place of the Regency as well as the resignation of Georgios Papandreou from his premiership.
As a expert in the realm of Greek politics, Balfour played a significant role in the bloody events of December 1944 and the Varkiza Agreement of February 12, 1945 between the Greek state and the communist guerrillas.
It is said that he was even “the tongue and translator” of General Ronald Scobie, who was pivotal in the outcome of the Greek Civil War.
He was also said to have served as the advisor to another obscure British man, Reginald “Rex” Leeper, a member of the Secret Service who served as Britain’s ambassador to the Greek government from 1943 until 1946 (which was in exile in Cairo until October of 1944). Leeper was also said to have played an important part in the Greek Civil War.
Major David Balfour lived in Greece until 1947.