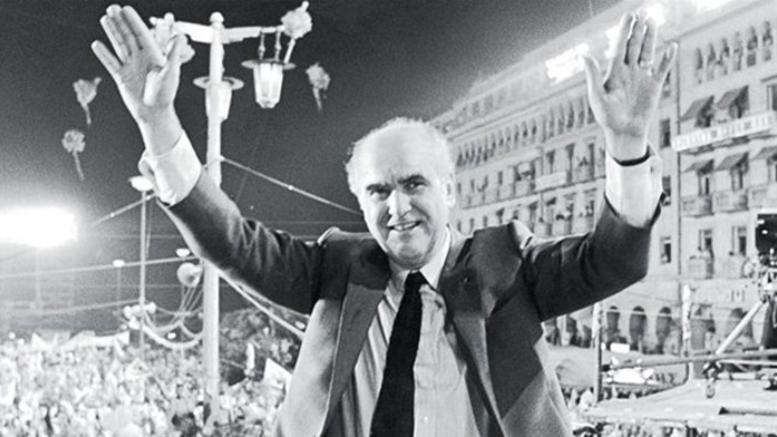 It was June 23, 1996 when Greece lost its first leftist prime minister and great reformist Andreas Papandreou, a politician who was adored by some and disliked by others.
Like all great politicians, Papandreou had many admirers and equally as many sworn enemies. His followers believe that he modernized Greece by ridding it of some conservative traditions. His opponents believe that he was a cunning populist who degraded Greek political life and built a huge, labyrinthine State.
Born on February 5, 1919, on Chios island, Andreas Papandreou had some big shoes to fill, as he was the son of Georgios Papandreou, a revered politician of the Center Union who was lovingly called by most Greeks the “Old Man of the Republic.” Andreas’ future course seemed to be set from the time of his birth.
Papandreou studied in the United States, where he lived for two decades, becoming a U.S. citizen. In 1943 he earned a PhD at Harvard, where he became assistant professor in 1947. After that, he taught at the University of Minnesota, UCLA and other universities.
In 1951 he married Margaret Chant, a U.S. citizen. It was his second marriage after his first, with Christina Rassia. Andreas and Margaret had four children, George, Sophia, Nikos and Andrikos (Andreas).
In 1959, Papandreou returned to Greece for one year on Guggenheim and Fulbright scholarships, heading up a research program on economic development. In 1960 he was appointed chairman of the board of directors, general director of the Athens Economic Research Center, and advisor to the Bank of Greece.
When his father became Greece’s prime minister, heading the Center Union party in 1963, Andreas decided to enter Greek politics. He renounced his American citizenship and in  February of 1964 he was elected MP from the Achaia region.
The political upheavals of 1965 led Constantine II, the King of Greece, to dismiss George Papandreou as Prime Minister. continued political turmoil led to the Colonels’ Coup of April 21, 1967, when Papandreou was arrested and imprisoned.
However, pressure from political and academic institutions forced the dictators to release him from prison one year later on the condition that he would go into exile. Papandreou moved to Sweden, and then to Canada.
In 1968, the exiled politician established the Panhellenic Liberation Movement (PAK), an activist, anti-junta organization which remained active until the fall of the dictatorial regime in July of 1974. 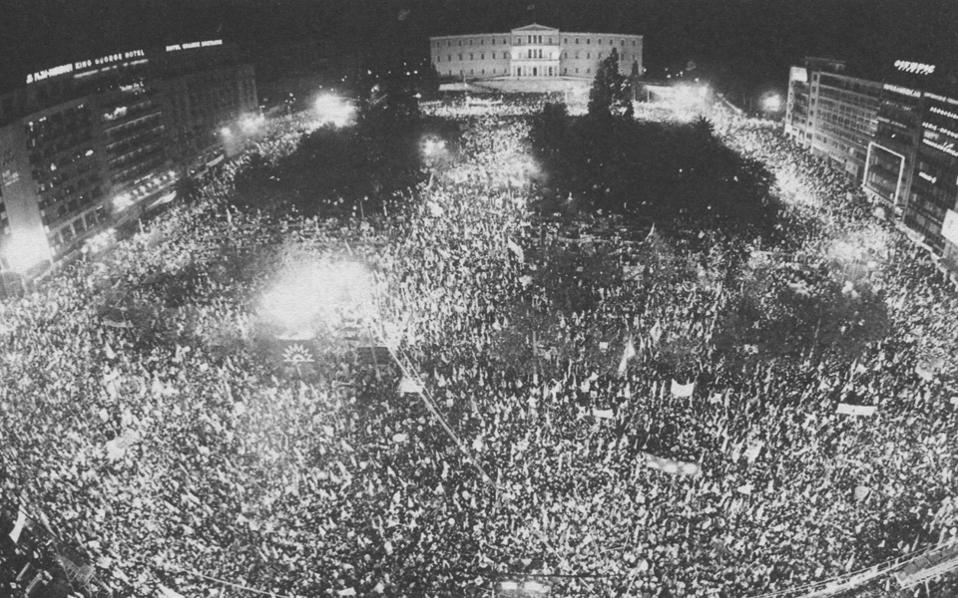 Papandreaou’s glorious return and the birth of PASOK
Once democracy was restored in Greece in July of 1974, Papandreou returned and formed the Panhellenic Socialist Movement (PASOK) two months later, on September third. In the first post-dictatorship elections in November 1974, PASOK received 13.5 percent of the vote and 15 seats in parliament.
In the next elections, in November of 1977, PASOK made a significant leap, doubling its strength to 25 percent, becoming the main opposition party with 93 MPs.
In October 1981, Papandreou, using the slogan “Change,” won the national elections, and PASOK, with 48 percent of the total votes and 173 MPs became the first non-conservative government in Greece. Along with the premiership, Papandreou took on the post of Minister of National Defense.
The socialist government immediately carried out reforms that led to wealth redistribution, establishing worker-friendly labor laws, aiding the unemployed, raising the minimum wage and increasing salaries in the public sector and pensions, while at the same time hiring thousands of public servants.
Four years later, Papandreou was elected for the second time. This time PASOK garnered  45.2 percent of the vote and was able to place 161 deputies in Parliament.
Papandreou’s first serious health problems appeared in 1988. He was rushed to the Herford hospital in London, undergoing major heart surgery. In the same year, he divorced his second wife Margaret and married flight attendant Dimitra Liani.
In the 1989 elections, however, PASOK came in second, with 39.15 percent of the vote and 125 House seats. In the repeat electoral contest PASOK again came in second, with 40.67 percent of the vote and 128 seats.
In the 1990 elections, PASOK came in second once more, with 38.62 percent and 125 seats. Finally, the New Democracy Party took the reins of government under Konstantinos Mitsotakis.
In October, 1993, following the resignation of the Mitsotakis government, Papandreou won for the third time getting 46.82 of the vote, forming his third government.
In November of 1995, Papandreou was transported to the Onassis Cardiac Surgery Center with serious health problems, which led him to resign from the prime minister’s seat in January 1996. On June 23 of that year, the wily politician died of a heart attack. 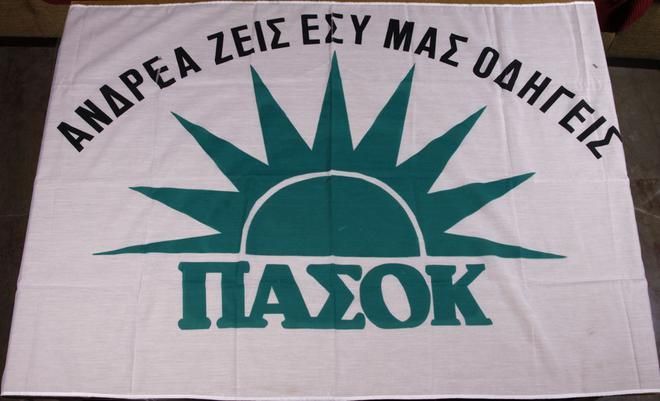 The Papandreou Legacy
Among the important social reforms Papandreou brought to Greece was the legalization of secular marriage, the vote at age 18, the introduction of the monotonic  writing system (1982), changes in Family Law such as the introduction of gender equality and the prohibition of the anachronistic institution of the dowry.
He also was responsible for the abolition of many laws instituted by dictator Ioannis Metaxas and post-Civil War governments, including those characterized as hooliganism and accusation of espionage against left-leaning citizens.
He, more than anyone else, was responsible for forming a multidimensional foreign policy, reinforcing of the Greek Armed Forces, the recognition of the genocide of the Pontic Greeks and allowing the the political refugees of the Democratic Army, the leftist Resistance fighters who went into exile after the Civil War, to return to Greece.
Papandreou’s opponents criticized the tremendous increase in public spending and public debt in his administration’s financial management. They also criticized him for being too populist because he did not withdraw Greece from NATO and the European Union (then European Economic Community) as he had promised to do before he won his first election in 1981.
His opponents also caledl him responsible for inflating the size of the Greek government by hiring dozens of thousands employees in the public sector, thus creating a chaotic, bureaucratic state. They also called his foreign policy maximalist and dangerous to the national interest.