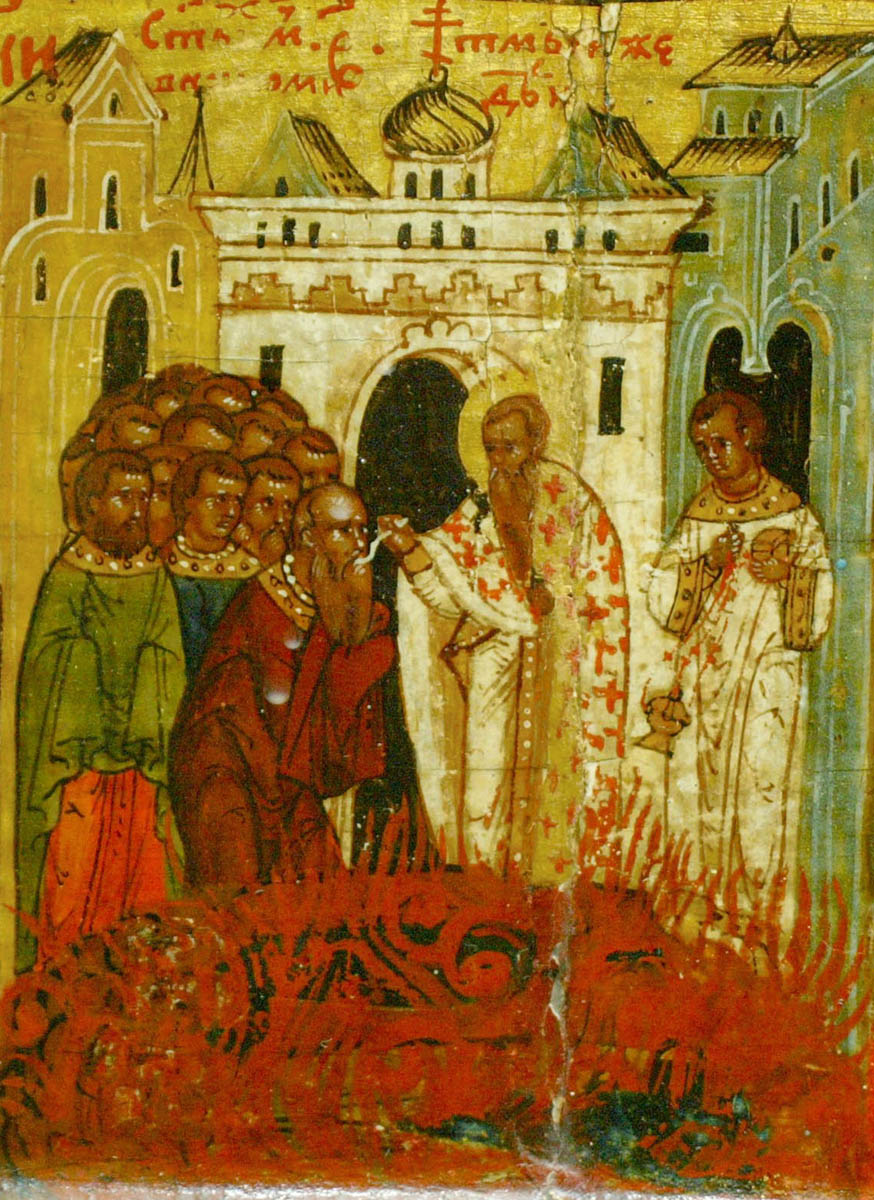 On December 28, the Greek Orthodox Church commemorates the death of the Holy 20,000 Martyrs of Nicomedia who were burned to death at the order of the Roman Emperor in the year 303.
At the turn of the fourth century, the Roman emperor Maximian (284-305) was growing increasingly angry over the spread of Christianity throughout the Empire. Even members of his court had been revealed as secret Christians.
Maximian gave orders to destroy Christian churches, to burn service books, and to deprive all Christians of their civil rights.
At this time the bishop of the city of Nicomedia was Saint Cyril, whose preaching had greatly contributed to the spread of the Gospel.
The pagan priestess Domna was living in Maximian’s palace and had secretly become intrigued by the teachings of Christianity. She went secretly to Bishop Anthimus, who was the successor to Cyril, and received holy Baptism. Domna soon began helping the poor, and even secretly distributed food from the imperial kitchens to the needy.
When the chief eunuch of the palace found out about the food, he had Domna put in jail in hopes that she would confess. Domna feigned insanity and she was subsequently released. She then somehow managed to leave the imperial court while Maximian was off to war. The abbess Agatha dressed Domna in men’s clothing, cut her hair and sent her to a monastery.
Upon his return from battle, emperor Maximian ordered that a search be made for the former pagan priestess. The soldiers found the monastery, razed it to the ground, and threw all the sisters into prison. Maximian’s rage against Christians continued to grow as he saw more and more of his citizens converting to the new religion.
The Emperor went to a church with a cadre of soldiers, and announced to the faithful that they could escape punishment if they renounced Christ. If they refused, he vowed to burn the church and all those inside it. The Christian presbyter Glycerius told him that Christians would never renounce their faith, even under the threat of torture.
Maximian commanded the presbyter Glycerius be arrested for trial. Unable to force Saint Glycerius stop confessing his belief in the teachings of Christ, Maximian ordered him to be burned to death.
On the Feast of the Nativity of Christ in the year 302, about 20,000 Christians had assembled at the cathedral in Nicomedia. The emperor sent a herald into the church to tell the faithful that soldiers had surrounded the building, and that anyone who wished to leave had to offer sacrifice to the pagan gods. Anyone who defied the emperor would die.
The Christians refused to worship the idols, and the soldiers prepared to set fire to the church. Bishop Anthimus baptized all the catechumens inside the church, and gave communion to the entire assembly of faithful. All 20,000 of the new Christians died in the fire.
The former pagan priestess Domna had been hiding in a cave during this persecution, and she managed to survive the holocaust. She discovered the remains of three of her new Christian friends who had been martyred, and gave them a decent burial, even burning incense at their gravesite and offering prayers there.
She was reported to the imperial authorities when she was seen praying at the site, and was arrested. She was beheaded at the order of the Emperor. The atrocities of Nicomedia have never been forgotten, and are commemorated to this day in churches all over the Orthodox world.