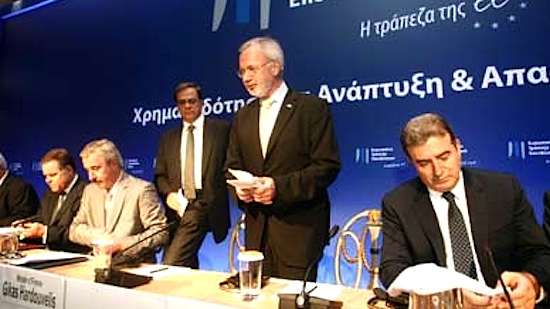 For the first time in eight years, Greece will see positive growth rates in the third quarter of the year, Finance Minister Gikas Hardouvelis revealed on Thursday.
Speaking during a ceremony for the signing of a loan agreement with the European Investment Bank for projects in the transport and energy sectors worth a reported 815 million euros, the finance minister stressed that investments are the key word for Greece. The EIB, he continued, will play a significant role in that. Hardouvelis made special mention of the country’s gradual return to capital markets and noted that fiscal recovery cannot survive without large investment initiatives that will raise incomes, create new jobs and confirm that citizens’ sacrifices are bearing results.
Hardouvelis demonstrated that investments have dropped by 50 percent in Greece since the beginning of the crisis and by 20 percent in Europe as a whole. This owes largely to a sharp drop in investments in real estate. The minister went on to note that investments on machinery equipment are currently stabilising.
In his speech, Mihalis Chrysohoidis, Greece’s Infrastructure, Transport and Networks Minister, argued that the revamping of major road projects is now underway. 10,000 people are currently employed on these projects. Chrysohoidis called for EIB support of new initiatives, such as the expansion of the Athens metro, the Kastelli airport in Crete and railroad projects.
Environment, Energy and Climate Change Minister Yiannis Maniatis called on the EIB to financially support Greece in its goal of becoming a regional energy hub.
EIB’s president Werner Hoyer said that the bank’s financial support for Greece totaled 9.0 percent of GDP, one of the highest percentages in the EU. He stressed that “only with these kind of investments can the economy recover and create new jobs.”
Since early 2014, EIB has signed loan agreements worth 1.375 billion euros to fund projects in Greece, including 232 million euros earmarked for loans designated for small and medium-sized businesses.