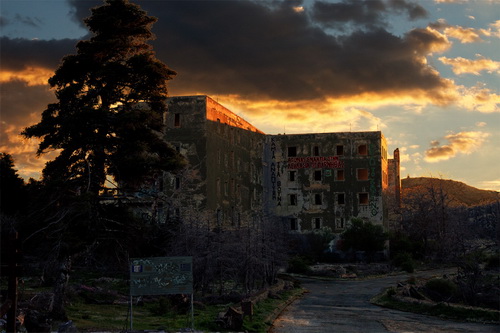 There is no doubt that an abandoned building on the top of a mountain can provide the ideal setting for a thriller movie. The former Athenian sanatorium on Mount Parnitha emerges like a ghost through the scorched grounds which were left behind by the catastrophic fire of 2007, and tells its own story.
The sanatorium is just 2km away from the Casino located on the mountain in the northern part of Athens, Greece, and was built in 1912 by the centrally located Evangelismos Hospital, as an alpine medical facility for the treatment of tuberculosis. The facility hospitalized many of the TB patients of the Greek capital city, including Greek poet Yiannis Ritsos who spent a year there.
After the discovery of penicillin the existence of the facility was deemed unnecessary and the premises were bought in 1965 by the Hellenic Tourism Organization (EOT), housing firstly a hotel and later being turned into the School of Tourism. The structure was finally abandoned in 1985.


Nowadays, the view of the deserted building is impressive. It is said that the facility is haunted by tears, pain, blood and death from the people hospitalized in it. Dozens of myths and legends were created surrounding the run-down sanatorium. Over the years there have been reports about “ghost voices” and shadows dragging themselves through the empty hallways, Satanists holding mystic ceremonies and drug addicts using the grounds to take drugs.
In 2012, a Greek sculptor created artworks carved on burnt tree trunks found on the premise and inspired by the history of the Sanatorium. The “Park of the Souls,” as it’s called, gave life to the trunks, which are showcasing the emotions of the sanatorium inmates.

“Because history repeats itself and is always more ruthless and cruel than the previous time, I decided to remind the old and teach the younger generations of the human pain associated with this premises,” said the sculptor in the story covered by Greek news-portal newsit.gr.