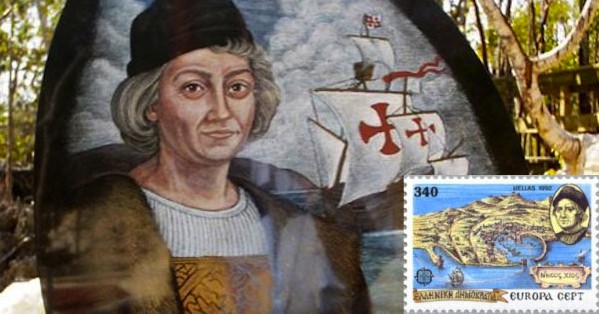 According to one of the theories on Christopher Columbus’ life and place of birth, the famous explorer was a Byzantine Prince from the Greek island of Chios.

There has been more written about Christopher Columbus than about any person with the exception of Jesus Christ, and yet his past has been shrouded in mystery. It is generally known and agreed upon by the majority of historians that Columbus’ family was from Liguria and Christopher was born in the city of Genoa, the son of Domenico Columbo, a local weaver. However, the exact origin of Christopher Columbus (his national or ethnic background) has been a source of speculation since the 19th century and recently many books have been published claiming that the great admiral might have been Portugese, Catalan, Polish or Greek.

In fact, according to the book  A New Theory Clarifying the Identity of Christopher Columbus: A Byzantine Prince from Chios, Greece” Columbus never said he was from Genoa.

“He said he was from the Republic of Genoa, something much different. The island of Chios was part of the Republic of Genoa. The name Columbus is carved above many doors in the villages of Pirgi and Cimbori and a priest with that last name traces his ancestry on the island back over 600 years. There are also many Genovese families who trace their ancestry back to Chios. Columbus also wrote about the gum-mastic called mastika which comes only from Chios.” Till this day on the Greek Island Chios, there are a lot of people that have the last name Colombus.

The argument supporting this theory also states that Columbus kept his journal in Latin and Greek instead of the Italian of Genoa.

Columbus also referred to himself as “Columbus de Terra Rubra” (Columbus of the Red Earth); Chios was known for its red soil in the south of the island where grow the mastic trees that the Genoese traded. There is also a village named Pirgi in the island of Chios where to this day many of its inhabitants carry the surname “Columbus.” At the village of Pirgi where he also had a house, Columbus convinced a lot of Greek sailors to follow him on his Spanish funded journey to discover India, as he- then- thought.

A few more researchers have speculated that Columbus may have come from the island of Chios in Greece.

A Greek immigrant to America, Seraphim Canoutas, spent years trying to prove that Columbus was from a Greek family originally from Byzantium.

Ruth G Durlacher-Wolper, the founder and the director of the New World Museum and the New World Foundation in San Salvador, Bahamas, where Columbus’ ships first landed in 1492 and author of “A New Theory Clarifying the Identity of Christopher Columbus: A Byzantine Prince from Chios, Greece” summarized the 22 facts contributing to the clarification of Columbus’ identity.

Among the most interesting:

Columbus never asked Italy for ships or aid for food and shelter when he needed help. If he was from Genoa than why not? Nor does he ever mention the Columbo family of Genoa to whom history says he was related. He neither spoke or read Italian. Yet in his favorite book Imago Mundi by Cardinal Pierre d’Ailly he wrote in Greek in the margins.

Columbus was called Genovese because he dressed in Genovese fashion from Chios. He signed his name “Columbus de terra Rubra” which means of the red earth. The Mastic areas of Chios was known for the red color of the earth. He banked at St. George in Genoa which took care of the colonies like Chios.

Columbus kept two logs on his journey, one real and one false. The true log used the measurements in Greek leagues and the false in Roman. The author used the real logs and measurements to reconstruct Columbus discovery of the island of San Salvador and cleared up many discrepancies in the geography of the area.

The Colombo family of Genoa were illiterate and the Genovese Christophoro was a woolweaver. For this person to acquire the learning, experience and spirituality that Columbus had that could convince a foreign king and queen to entrust a small navy and a fortune to him doesn’t seem probable. Maybe in twentieth century America, a poor son of a common garment worker can grow up to become president but in the Europe of the 15th century it is unlikely he could make Captain, much less Admiral in Command of a fleet. It is more likely that for Columbus to have received an audience with a king and queen, have to be royal himself, or have some pretty good connections.

Columbus’ son Ferdinand wrote that his ancestors have always followed the sea. Unless the Columbo family of Genoa had a long history of being ships tailors or official shearers of sea-sheep then they were not related. In fact even though they were living in Genoa at the time that Ferdinand was writing about his father, they are not mentioned. Nor are they mentioned in the Will of Columbus.

Columbus was not a wool-worker struck by God like Joan of Arc and instantly filled with knowledge of navigation, philosophy, astronomy, psychology, languages and the power to convince kings to give him whatever he wanted. This was a man with a lifetime of education, culture, experience and inspiration who had a sense of his own destiny and the drive to fulfill it.

In the book, we discover that not only was Columbus connected with the Paleologos family but many of his buddies were Greek too. Perhaps this is the most convincing argument for me. Anyone knowing Greeks in exile is aware that they are a tight group that trust each other and spend all their time together, bound by that thread of Hellenism. As convincing as all the other arguments, (and there are many in this small book), the fact that his ‘parea’ was Greek, (in other words his group of friends and associates), proved to me that Christopher Columbus was not the son of an itinerant Genovese wool-worker, but a Byzantine prince from Chios who came from a life of enlightened education and spiritual aspirations, and as an islander, combined it with a love of the sea.

The islanders from Chios are known for their skill on the sea and for the number of sea captains and ship owners from there. If Columbus was Greek then Chios is the most likely island he would be from. Chios has Genovese architecture and a sea-faring history, and its people have executed heroic exploits.