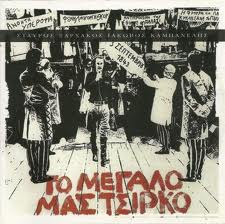 “Our Big Circus”–μost Greeks above the age of 50 are undoubtedly familiar with the legendary theatrical play that was introduced to the public back in 1973-4 and ever since was only performed in school events and only because certain teachers happened to share extraordinary “sensitivities.”
Younger Greeks have only heard of it through the songs of the play sung by the main performers, such as Nikos Ksylouris, Jenny Karezi, Kostas Kazakos and others. Politically and emotionally strong after the end of the dictatorship in Greece and the death of the two legends Ksylouris and Karezi, the play is considered to be a little- known masterpiece of the modern theatrical art in our country.
In form of a folklore party, the three-hour play has always enchanted the audience whenever it was on stage. “Our Big Circus,” a political, satirical play written by Iakovos Kambanellis was first performed at the Athineon Theatre on June 22, 1973, by the Karezi-Kazakos troupe leading the two main actors to incarceration for several nights and the writer under house arrest for two months.
The anti-junta play was only on stage for two years (1973-1974) and no private or state theatre dared to present it ever again, apparently because of its strong political overtones.
That seems to have come to end, as the National Theatre of Northern Greece has defied the past “restriction” posed on the meaningful play.
After Thessaloniki and Athens, the summer national tour commences on Corfu  with two performances followed by a performance at the Roman Odeon in Patra (July 9 and 10),Ilida (July 11), Zakynthos (July 13), Tripoli (July 15), Nikea (July 18), Ilioupoli Attica (July 19), Petroupoli (July 20), Lavrio (July 21), Argos (July 22), Delfi  (July 24), Katerini (July 25), Volos (July 29), Larissa (July 30), Athens at theMelina Merkouri Theatre (July 31), Nemea (August 1), Chalandri Attica (August 2), Rafina (August 4), Rhodes (August 6), Comotini (August 9), Alexandoupoli (August 10), Thasos (August 11), Kavala (August 12), Siviri Chalkidiki (August 13), Chios (August 19), Mytilini (August 20), Rethymno (August 23), Heraklion (August 24 and 25), and Chania (August 26 and 27).
The play will be performed again in Athens (Acropol Theatre) and Thessaloniki (Royal Theatre of the National Theatre of Northern Greece) during the winter season, but exact dates remain to be announced.