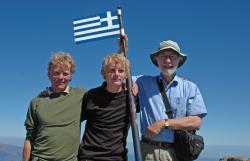 Greece is a second home to him, and for the past fifty years he has been wandering around the country recording its extraordinary flora species. Swedish Professor Arne Strid is a botanist who has published many interesting books on the mountainous Greek flora (The Mountain Flora of Greece) and the wild flowers of Mount Olympus.
Moreover, he is part of the team of experts co-authoring the Flora Hellenica Bibliography, which has already had the first two volumes of the complete eight parts published. In 2013, the Atlas of the Aegean Flora is expected to be published, including some 400 different flora species flourishing in the zone of the Aegean Sea.
He first came to Greece in 1964 as a student and was encouraged by his professor to study the plants and vegetation of the Cyclades Islands. Since then, the Professor Emeritus of botany has dedicated his work to the Greek countryside and its unique flora species. Strid’s studies and work present the most recent and completed research of  Greek flora. He was recently awarded for his commitment and work by the Hellenic Range and Pasture Society.
His favorite place in Greece is the Lakes of Prespes in north-western Greece, where he can enjoy the tranquility of nature at its best.
According to the Swedish botanist, Greek flora includes some 6,000 different species, out of which 750 are totally unique. Strid has so far published twelve books and more than 140 research articles on the floristic, taxonomy, bio-systematic and phytogeography of Greek flora.