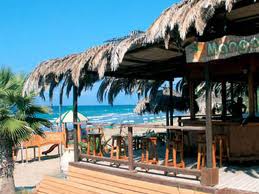 A decision has been taken on the issue repeatedly raised in the past by several environmental groups and organizations concerning the operation of beach bars in regions of Halkidiki that have been enlisted in the European-wide Natura 2000 networking program.
More particularly, the environmental organization on wildlife and nature “Kallisto”, the “Greek Ornithology Society” and the “Ecological Movement of Thessaloniki” had long now presented the problem of open beach bars next to the wetlands of Aghios Mamas in Halkidiki. The region has been registered as a Natura 2000 protected area because of the severe impact tourism has on the erosion of the birds fauna visiting the wetlands and now, for the first year, the beach bars of Aghios Mamas will not open in the summer.
It must be noted that the issuance of operation licenses to similar businesses by the Municipality cannot be completed before the environmental study of the area based on the Natura 2000 protection status.
Moreover, the environmental organizations stated that according to information, there are several business operation licenses pending regarding construction on the seashore of Nea Heraklia, which may not be a Natura 2000 registered area yet but has sand dunes, which belong to the top priority habitats according to a EU directive.
On his part, the mayor of Nea Propontida, Damianos Iordanides, assured citizens that after last year’s fines, the municipality cannot issue any licenses without first getting the authorization of the Ministry of Environment, Energy and Climate Change.
Mr. Iordanides, however, raised a different issue besides the environmental protection of the region, namely the unemployment of the local people, who rely heavily on the summer incomes from tourist activities in the beach zone. “Young businessmen would make a living in summer to make it through the winter. We love our region and try to protect the environment as much as we can. However, we must not forget that unemployment in our region exceeds 25 percent and the relative ministry should take care of the young businessmen who cannot work on the protected areas” noted Mr. Iordanides.
The deputy prefect of Central Macedonia, Dionysis Psomiades, said during a press conference on tourism that several monitoring mechanisms are raising obstacles to the efforts of exploiting different regions for touristic and economic purposes, including the Contemporary Monuments Ephorate, the Forest Inspectorate, the ecologists and the Hellenic Public Real Estate Corporation.