Among many other things, Greece is known for its healthy and tasty food. However, one specific type of Greek traditional food, the pie, holds a special place, as it is among the oldest, simplest, and yet most delicious dishes one can find in the country.

There are so many variations of pies, or “pites,” as they are known in Greek, that it wouldn’t be an exaggeration to say there’s no way to even count precisely how many different kinds of Greek pies there are out there.

Nonetheless, regardless of their filling or their different types of crusts, Greek pies share some basic common characteristics. Essentially, they are made of the simplest possible ingredients and they can feed a lot of people—and when we say a lot, we mean…scores of people!

This is the reason why pies were able to keep much of the Greek population alive during the challenging years of World War II and every other time the country had to face harsh conditions for whatever reason.

Pie, an Essential Dish of Greek Food Since Antiquity

Almost every Greek household even back into antiquity had some flour, a little bit of olive oil, some milk or cheese, and herbs. it is these basic ingredients that can be used to make one of the most delicious Greek pies one can ever find: the much-loved ”tiropita.”

Tiropita, which literally means cheese pie, can be described as the most basic form of pie, from which all other variations have emerged.

Flour is used for the phyllo pastry while milk is used for the feta cheese and herbs from the backyard of the house or the nearby mountains add the much-needed flavor to this delicious dish. 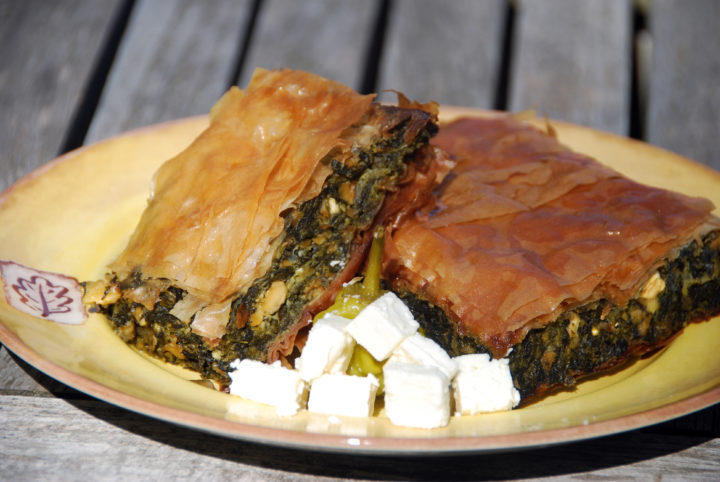 And then comes culinary chaos! From the moment a cook is finished laying out his or her phyllo, all the later fillings are simply a matter of imagination.

Spinach, leeks, tomatoes, leafy greens, pumpkin, peppers, chicken, lamb, pork, cream, mushrooms, pasta, turkey, mince, beans—and the list can go on, and on, and on. Of course, the kind of pie you’ll find in a specific region of Greece is determined by its traditions, geomorphology, climate, and history.

For example, northern parts of the Greek mainland are known for their thick, hearty pies with a great deal of meat and fat since their winters are long and harsh, and these pies offer people some much-needed calories.

Kreatopita, traditionally made with minced pork and leeks in Macedonia, is a great example of this tradition. A similar example would be the famous ”bougatsa,” another northern Greek delicacy, made traditionally with thick custard, cinnamon, and ”bougatsa” pastry, which is a more tender yet still crispy variation of phyllo pastry.

On the other hand, the southern regions of the country and its many islands have tons of traditional pies that are a bit lighter with less animal fat and more olive oil, vegetables, and fine cheeses.

A mouth-watering example of this would be the ”strifti” from Skopelos. While it is by no means a ”light” dish, strifti is traditionally made of goat milk, cheese or, specifically, feta cheese, and a swirly, super-crunchy phyllo pastry,full of aromas from the island’s herbs.

Lighter variations of strifti include pies made with mizithra cheese, which is a softer and lighter version of the Greek-style cheese or simply made with greens and vegetables without any animal fat or meat; this is most ideal for vegetarians.

Of course, sweet pies are a must when one tries Greek desserts, as, of course, one must.
The traditionally sweet Greek pie made with pumpkin is a common, hearty dish eaten between October and the end of winter.

Other sweet pies are made of custard, milk, or even cheese, which all taste lovely even when cooked as a sweet, such as the mizithra pie mentioned above. The list of examples of pie variations from Greece could literally be infinite.

Each region of Greece is justifiably proud of its own “pita,” so why don’t you go out there and discover it on your own? Now, if you’re away from Greece, there’s still no need to despair. You don’t have to wait until your next trip to this magical country to taste these delicacies for yourself.

Your local delicatessen could offer you the opportunity to buy some traditional Greek ingredients to try and make one on your own! Be creative and feel free to use all these different ingredients from all over the country to make your own special Greek delicacy, which could be the best way to help you remember the taste of Greece.

Ten of the Most Delicious Greek Pies You Can Try:

The sweet miracle of Northern Greeks, “bougatsa” is made with a special, tender yet crunchy phyllo pastry, filled with thick custard. In Northern Greece, people enjoy this with scores of ingredients from spinach to minced beef and even chocolate, but southern Greeks prefer its sweet variation.

Probably Greece’s most famous and loved pastry, the spanakopita is a delicious dish based on spinach and feta cheese. It is widely eaten across the country and is one of the most well-known Greek dishes globally. 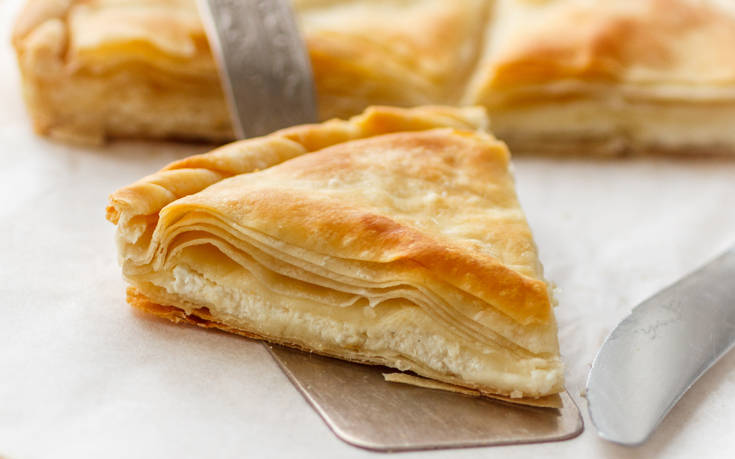 The “tiropita,” or feta cheese pie, can be described as the foundation of Greek pies.
Made with scores of different kinds of dough, this dish is a savory choice that offers a unique, Greek gastronomical experience.

”Kreatopita” is a broad term that describes Greek pies filled with meat. Traditionally made in northern parts of the country, such as Macedonia and Epirus, it normally has a filling of minced beef or pork and vegetables, such as leeks and onions.

The “galatopita” or “milk pie,” is a traditional delicacy found across the country as a desert.
Made with cow’s milk and sugar, it could be described as a tasty, Greek variation of cheesecake.

This traditional pie from the island of Skopelos is a delicious pie full of flavor. It is a cheese pie made either with feta or goat cheese. Also known as “the pie from Kozani,”  this swirly, circular cheese pie is considered to be one of the tastiest Greek pies one can find.

The “patatopita” is Greece’s famous potato pie. This dish is made with scores of herbs and potatoes, making it an earthy, mouth-filling dish, eaten in many parts of the country, mainly during winter.

One of the most famous sweet Greek pies, this dish offers a unique taste of the country’s cuisine. Made with pumpkin across the nation in autumn and winter, the “kolokithopita” is a must for anyone who loves Greek cuisine. 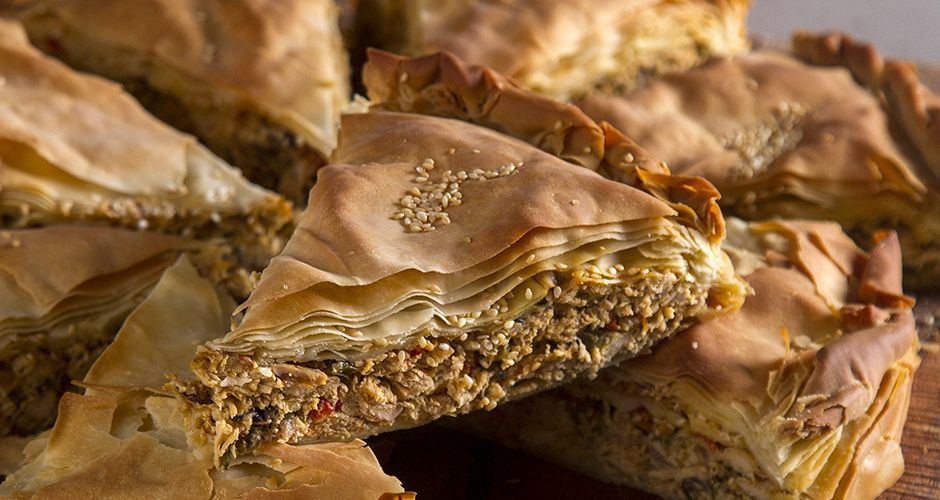 The ”kotopita” is a variation of meat pie, which calls on chicken instead of beef or pork.
It is considered a tasty yet lighter dish than meat pie, and it normally contains peppers and scores of other vegetables. 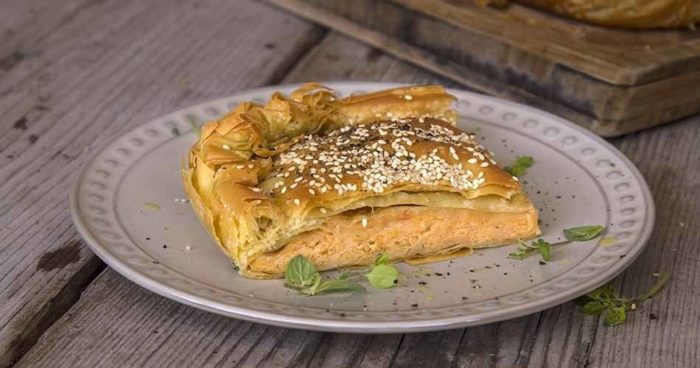 The “kaseropita” is a tangier variation of “tiropita.” Made with Greece’s “kaseri,” a yellow cheese, it is similar to cheddar cheese, and the kaseropita is the best alternative for those who are not fans of feta cheese.