GRNews
GreekReporter.comGreek News'Taverna By the Sea,' a Funny Memoir on Running a Taverna in...

‘Taverna By the Sea,’ a Funny Memoir on Running a Taverna in Greece

Taverna by the Sea is an enchanting, funny and poignant memoir about answering the call of adventure by taking on a challenge: helping to run a taverna beside an idyllic beach in Greece.

British author Jen Barclay describes how during a walking trip on the South Aegean island of Karpathos, a chance encounter with Minas, an unconventional Greek-American hotel owner, resulted in a once-in-a-lifetime experience.

“Must be comfortable in beachwear,” reads Minas’ ad for a waitress. Thinking it sounds dreamily perfect, Jen drops everything, returning with her dog to the remote bay that will be her home for the summer.

Though the season begins peacefully, life at the taverna soon becomes absurdly busy and challenging. There are days of no running water, mad guests, collapsing ceilings, and a goat tied to a tree.

Taverna by the Sea reveals what happens in a peaceful paradise

Yet, it is exhilarating: waking to a pink dawn over the olive grove; swimming in the moonlight; listening to music under the stars; feasting on freshly baked bread, sampling local honey and warm figs; and consuming wine on tap.

With a colorful cast of characters, Taverna by the Sea reveals what happens behind the scenes of an apparently peaceful paradise, capturing both the difficulties and the magic of remote island life.

An inspiring call to live life to the full—and even escape the rat race—it also conveys the life-affirming importance of trusting one’s instincts, taking risks, and grasping opportunities. 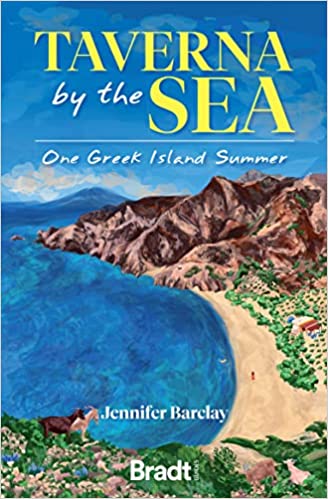 After graduating from Oxford, Barclay spent a year in Athens and traveled widely throughout the Greek islands including cleaning hotel rooms in Santorini and wearing a swimsuit.

She worked in Canada, France, and England as a literary agent and editor before going freelance and settling on Tilos, a small island in the Dodecanese, in 2011. She helped in a beach cantina run by her fisherman boyfriend before the summer at the taverna by the sea.

Currently an editor, she still lives on Tilos, surrounded by hills and sea with her dog.

Taverna by the Sea by Jennifer Barclay is published by Bradt Guides.