The Greek Origins of Saint Mark’s Horses in Venice 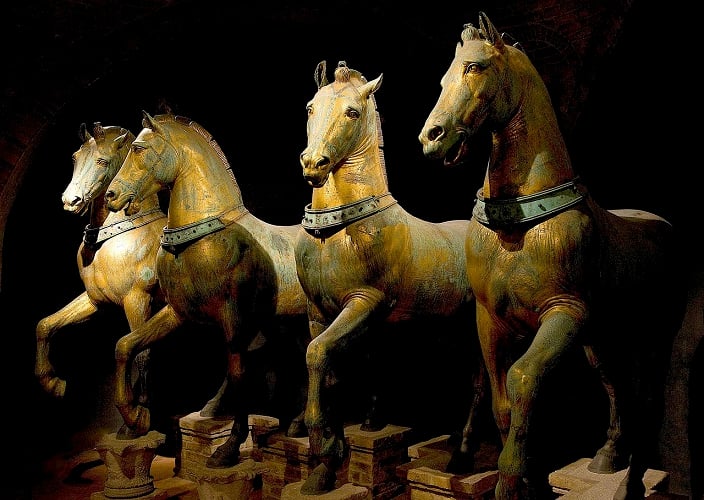 Attributed to the ancient Greek sculptor Lysippos, the exquisite horse statues adorning the basilica of Saint Mark in Venice have their own fascinating story to tell.

Although cast in eternal stillness, the four horses have managed to travel throughout Europe through the centuries as precious spoils—from Chios to Constantinople, then Venice, Paris, and back to Venice—where visitors can still admire them today.

Despite their rich history and well-documented transfers from one great capital to another, it remains unclear when or where Saint Mark’s horses were actually created.

Also known as The Thriumphal Quatriga, the set of four horse statues is believed to have been part of a monument depicting a four-horse carriage used for chariot racing.

Though widely believed to have most likely been created in the 2nd or 3rd century AD, some scholars suggest that the naturalistic rendering of the animals and technical expertise in execution point to a classical Greek origin instead.

The eighth- to ninth-century Parastaseis Syntomoi Chronikai, a Byzantine text on the topography of Constantinople and its monuments, finds the horses and their quadriga displayed at the Hippodrome of Constantinople.

Knowing that the actual Saint Mark’s horses had been looted from Constantinople and brought to Venice in 1204 during the 4th Crusade, art historians identified the statues as the “four gilt horses that stand above the Hippodrome” and “came from the island of Chios under Theodosius II” described in Parastaseis Syntomoi Chronikai.

After their having been looted by Venetian forces as part of the sack of the capital of the Byzantine Empire in the 4th Crusade, Doge Enrico Dandolo sent the horses to Venice, where they were installed on the terrace of the façade of St Mark’s basilica in 1254, according to Francesco Petrarch’s Letters of Old Age (Rerum Senilium).

Over five centuries later, 1797 marked the famous horses’ next travel, this time to Paris.

Napoleon had the horses forcibly removed from Saint Mark’s Basilica and carried off to the French capital, where they were used in the design of the Arc de Triomphe du Carrousel together with a quadriga.

Finally, in 1815, the horses were returned to Venice by Captain Dumaresq following the Battle of Waterloo.

The war veteran was selected by the Emperor of Austria to take the horses down from the Arc de Triomphe du Carrousel and return them to Saint Mark’s basilica in Venice, a task for which Dumaresq was reportedly awarded with a gold snuff box with his initials in diamonds on the lid.

Today, the horses can be seen on display inside the basilica.

They were removed from the façade for conservation purposes and replaced with replicas in their position on the loggia in the 1980s to protect them from air pollution damage.

A second set of replicas of the horses can also be seen on the Arc de Triomphe du Carrousel in Paris, France, where Napoleon had the original looted statues placed in 1797.