GRNews
GreekReporter.comGreek NewsPrincess Alice, Philip's Mother, and Her Life of Philanthropy in Greece

Princess Alice, Philip’s Mother, and Her Life of Philanthropy in Greece

Princess Alice of Battenberg, Prince Philip’s mother, was a little-known member of the British royal family, who lived a tumultuous life of tragedy but also of great philanthropic work in Greece.

Princess Alice, who was the mother of Prince Philip and who became the mother-in-law of Queen Elizabeth II in 1947, spent half her life in Greece.

She loved the nation and its people so much that, at some point, she began to call it “my country.”

This privileged but troubled woman, who was the great-granddaughter of Queen Victoria, was born in Windsor Castle on February 25, 1885.

Her father was Prince Louis of Battenberg, and her mother was Princess Victoria of Hesse and the Rhine. She was christened “Victoria Alice Elizabeth Julia Marie.”

Despite being born deaf, her mother demanded that she participate in adult discussions from an early age, so that, shortly before she reached adulthood, Alice was able to read the lips of her interlocutors in many languages.

Not only did she learn to lip-read, but she also spoke English and German fluently.

In 1903, she married Prince Andrew of Greece and Denmark (who was known as “Andrea” within the family), the fourth son of King George I of Greece and Olga Constantinovna of Russia. Prince and Princess Andrew settled down in Greece and had five children.

Carefree life in Europe and Greece for Princess Alice

The princess led a relatively carefree life, traveling about Europe and doing her charity work between the years 1905 to 1914 while Andrew was devoted to his military career in the Greek Army. She was honored for her work with the Royal Red Cross in 1913.

In June of 1917, when World War I was raging, the royal family was forced to go into self-exile in Switzerland due to the insistence of pro-German King Constantine I that the country remain neutral despite the insistence of Prime Minister Eleftherios Venizelos to join the Entente.

However, King Constantine was later exiled, as well. Following the upheaval of the war and the referendum of 1920, Constantine I returned again to Greece along with the rest of the royal family.

In June of 1921, Princess Alice had Prince Philip, her fifth child, who would later marry Britain’s Princess Elizabeth, and be crowned Elizabeth II.

The family was living at the royal residence in Corfu at the time of Philip’s birth. However, the relative peace of those short years was not to last. After the Asia Minor Disaster of 1922, the king and his uncle were unwanted in the country and were forced to flee into exile in Paris. 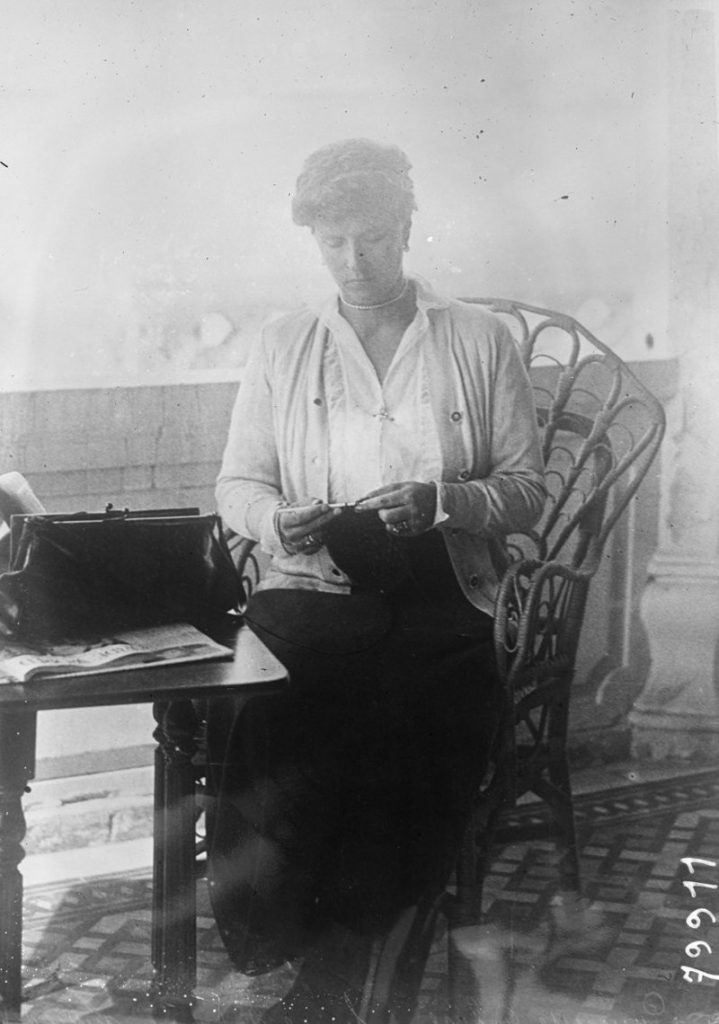 The infant Prince Philip was spirited away from Greece hidden inside a crate of oranges.

In fact, his father Prince Andrew was even sentenced to death by an extraordinary military court, but his sentence was later reduced to exile.

Princess Alice was so shaken up by the events that she turned to mysticism as a solace, and she began to embrace the Greek Orthodox faith. Tragically, she also suffered a nervous breakdown.

In February of 1930, she was diagnosed with schizophrenia and was transferred—against her will—to a sanatorium in Switzerland, where her therapist consulted Sigmund Freud for a further diagnosis.

Freud’s diagnosis, as it so often was, was that the woman was suffering from sexual frustration. As a result, her therapist decided to order electric shock therapy and cause premature menopause by bombarding her ovaries with X-rays so as to destroy her sex drive.

Although Princess Alice tried to escape the sanatorium many times, she eventually stayed there for two years, where her husband visited her only a single time. He preferred to spend his days in southern France, drinking and playing cards while surrounded by women.

After her release from the sanatorium, Princess Alice traveled around Europe without anyone knowing her true identity, and for over seven years, she had no contact whatsoever with her husband or even her children.

However, in 1937, her daughter, Princess Cecilie, along with her son-in-law and two of her grandchildren, were killed in an air crash at Ostend, Belgium. She and Prince Andrew met again for the first time in six years at their funeral.

This tragic event at least motivated Princess Alice to resume contact with her family, but in 1938, she returned to Athens—all alone—to work with the poor while living in a small, two-bedroom apartment in the Kolonaki area.

Although she had little means and was basically starving herself, she managed to set up a food truck for the sake of helping young children who suffered of food scarcity. When she went broke, she traveled to Sweden to raise the necessary funds.

After the outbreak of World War II, she bravely continued her charity work with the same intensity.

During the German Occupation of Greece, she faced the irony of having two sons-in-law fighting on the German side and one son (Philip) fighting alongside the British Royal Navy.

It is said that when visited by a German general who inquired about how he could help her, she replied, “You can take your troops out of my country.”

During that time, Princess Alice sheltered a woman of Jewish descent, Rachel Cohen, with her five children in her own home.

Several years later, when a member of the Cohen family happened to meet her in Rome and thanked her, she responded: “I was just doing my job.”

In 1949, Princess Alice founded the “Christian Brotherhood of Martha and Mary” in Athens, which hosted both a clinic and a school for nuns. It was then that she began to wear the robes of a nun which she would wear for the rest of her life as she continued on with her philanthropic work.

Princess Alice remained in Greece until mid-1967 but still traveled the world to raise money for her cause.

However, after the April 21st coup and the establishment of the colonels’ dictatorship, her son, Philip, who was now the husband of the Queen of England, asked his mother to return to her homeland.

Princess Alice spent the last two years of her life in a single room in Buckingham Palace alongside her son and his family.

She died on December 5, 1969 at the advanced age of 84. She left no possessions whatsoever behind, as she had given everything she had ever owned to the needy.

The princess was initially buried in St. George’s Chapel in Windsor Castle despite her express wishes that she be interred at the Convent of Saint Mary Magdalene in Jerusalem.

Her wish finally became a reality on August 3, 1988, when her body was reinterred there.

In 1994, Princess Alice was honored as “Righteous Among the Nations” for having hidden the Cohen family in her Athens home during World War II.

In 2010, the brave, undaunted princess was also posthumously named a “Hero of the Holocaust” by the British government.