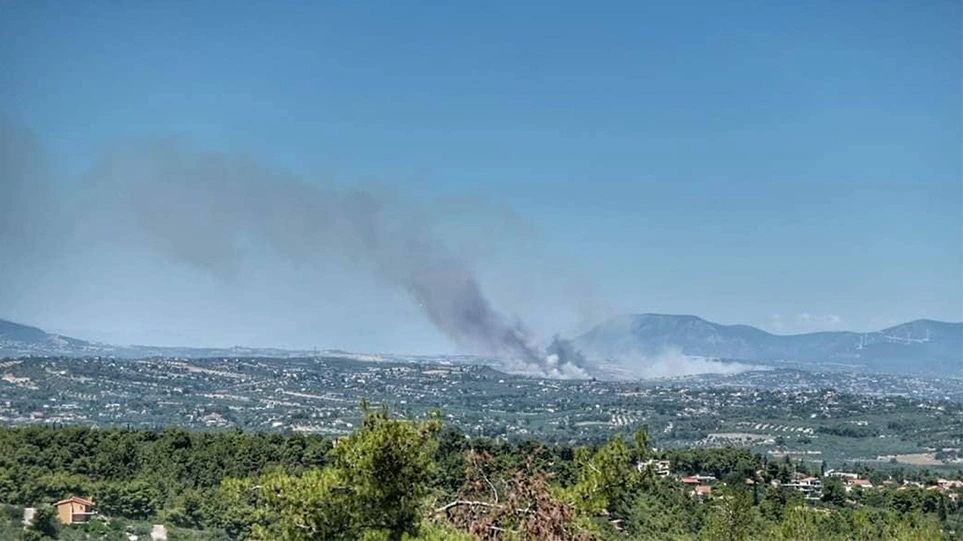 Firefighters are battling a large fire that broke out earlier on Monday in Schimatari north of Athens.

Municipal authorities are calling for the precautionary evacuation of Dilesi, a seaside resort town in the region of Viotia.

According to the Fire Service, four water-dumping airplanes and two helicopters have been thrown into the battle, which is being fought on the ground by seventy firefighters and seventeen trucks.

The wildfire, which started in low-lying brush, appears to have spread west to Schimatari but also east to Tanagra, which is home to an important air force base, as strong winds stoked the flames.

Authorities warned of increased fire risk in the area around Schimatari

On Saturday, the General Secretariat of Civil Protection warned that the continuing heatwave combined with strong winds will greatly increase the risk of fire in five regions of Greece.

The areas most at risk are the North Aegean (Lesvos, Chios, Samos, Ikaria), Attica (including the island of Kythira), Central Greece (Viotia, Evia), the Peloponnese, and Western Greece (Ilia, Achaia).

The Secretariat calls on citizens to avoid any open-air activities that can cause a fire due to negligence. These include activities such as the burning of dry grass or branches, the use of machinery that creates sparks, such as circular saws or welding devices, the use of bee smokers, and the disposing of lit cigarettes. Individuals should also be cautious while grilling outdoors.

On Friday, Greece welcomed the first contingent of a total of 200 EU firefighters who began their mission in assisting the work of their Greek colleagues during the summer firefighting season.

The Romanian contingent, which was the first foreign unit to arrive, is comprised of 28 firefighters and five vehicles. The contingent will remain in Athens until the end of July. On August 1st, they will be replaced by 25 French firefighters with four tenders and three auxiliary vehicles.

Other units, from Bulgaria, Germany, Norway, and Finland will be based in Larissa and Tripoli during July and August.

Greece is bracing for the fire season hoping to avoid a repeat of 2021 when it was hit by some of the most devastating fires in recent history in the northern part of the island of Evia and in West Attica.