GRNews
GreekReporter.comGreek NewsArchaeologyTen of the Acropolis Museum's Most Beautiful Exhibits

The Acropolis Museum which marks its thirteenth anniversary on Monday is located a mere 330 meters (1,000 feet) from the famed hill of the same name and is home to some of the world’s most important antiquities.

The museum, one of the ten best in the world according to Trip Advisor, was designed by architects Bernard Tschumi and Michael Photiadis, in a way that it offers a striking panoramic view of the archaeological sites from which its exhibits came.

The much-awarded museum is now home to more than 3,000 exhibits from the ancient Athenian citadel known as the Acropolis.

Divided into three sections, the lowest level consists of columns that hold a glass floor from which one can look down on an archaeological excavation site of the ancient city of Athens.

The middle level of the museum houses galleries from Greece’s Archaic period to the Roman Empire.

The third level is a rectangular court that depicts the marble sculptures just as they would have been arranged approximately 2,500 years ago in the Parthenon.

Of the almost countless priceless artifacts in the Museum, the ten that stand out from all the others are those indicated below.

Presumed to be created by the master sculptor Pheidias because of its vivid detail and exceptional artistry, a bearded rider tries to restrain his spirited horse by pulling decisively on the reins.

The horse resists, obvious from its swelling veins, but the horseman insists by holding his right foot firmly against a rock to rein it in.

The face of the rider was tragically lost at some point between 1802 and 1870. Archaeologists argue whether he was a warrior in the Athenian cavalry or a Thracian ally.

Others believe that the rider is the mythical king of Athens, Theseus, who united the scattered Athenian settlements.

The main theme of the 32 Parthenon metopes on the south side is the mythical battle between the Centaurs and the Lapiths. On metope 1, a Centaur grips a Lapith by the neck while ready to strike him with a tree branch he holds in his right hand.

However, we see the Lapith plunging his spear in his enemy’s belly while he tries to escape the Centaur’s deadly headlock.

The Centaurs were half-human creatures with a horse’s body from the waist down. While attending the wedding feast of King Peirithoos, a close friend of Theseus, they got drunk and attempted to carry off the Lapith women.

The two themes on the south side metope are either a fight between a Centaur and a Lapith or the seizing of a Lapith woman by a Centaur.

Historians argue whether the themes deal with Athens’ mythical past or if they depict scenes of a wedding that took place in the palace of Peirithoos in Thessaly.

The Caryatids (or Kore, meaning young woman or daughter in Greek) are five other must-see statues in the Museum. One is missing her right arm and shoulder as well as part of the right breast. Her left arm is broken just above the elbow.

Her forefeet are also broken, but the sandals she has on are clearly seen from the side.

It seems she supports her weight with the right leg which is firmly planted on the ground while the left is slightly bent.

Like all the other Caryatids, she wears a peplos (πέπλο in Greek, meaning ultra-light dress) with a belt and from her shoulders, a himation (υμάτιον in Greek, meaning overdress) is folded in two pleats over her back.

Like the other girls, her hair is also elaborately braided: one thin plait over the forehead and two more plaits from behind the ears are wrapped around the head like a wreath.

Two locks are braided down the back and bound with a band, leaving the wavy hair edges free. Two other locks of hair, mostly broken today, fall over each breast. 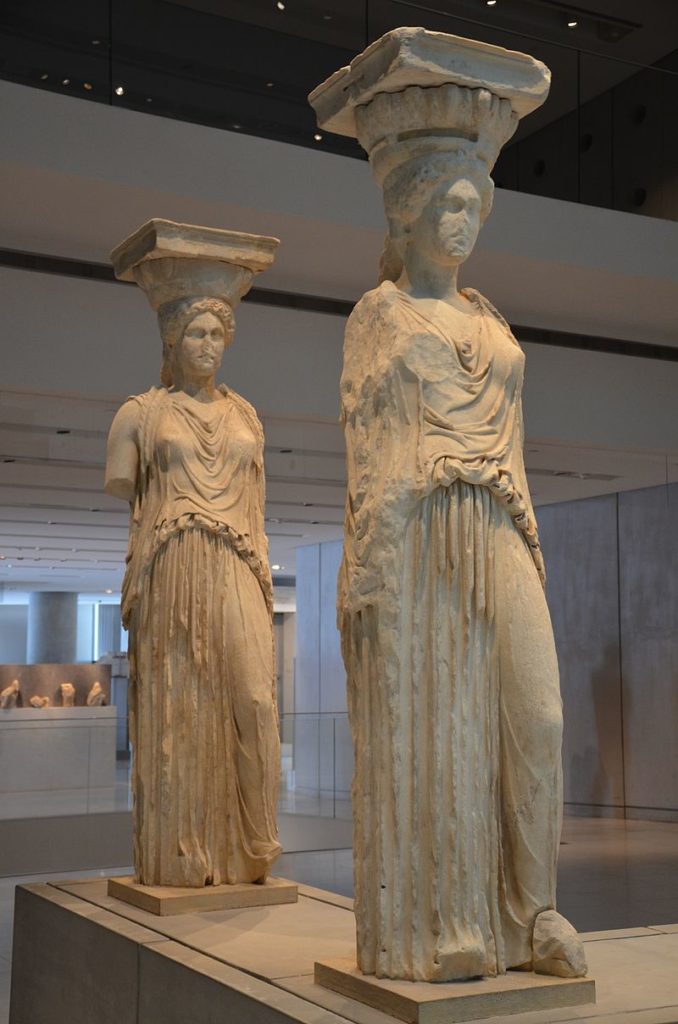 Head of statue of Alexander the Great

The statue of the head of Alexander the Great portrays him at a very young age. Historians believe it must have been created after his sole visit to Athens in 338 BC.

The great general is portrayed with deep set eyes, half-open lips, and facing upward. His rich curls fall over his forehead with red paint surviving in parts of his hair.

The statue is considered to be an original work of Leochares, who also sculpted other likenesses of Alexander at the sanctuaries at Olympia and Delphi.

Some scholars argue that Alexander’s bust at the Acropolis Museum was sculpted in the 2nd century BC long after his death rather than the time of his visit.

The statue was found in 1886 near the Erechtheion on the Acropolis.

Statue of the Antenor Kore

The largest Kore of the Acropolis Museum wears an elegant long-sleeved dress and a himation over it, secured over her right arm with buttons.

Spectrographical analysis shows that her garments were once decorated with painted rosettes and meanders in blue and red hues that have oxidized through time.

In her right hand, the Kore would have held an offering to the goddess while, with her left, she was likely pulling aside her dress to walk more freely.

Her hair falls down her back while four curled locks frame her face and spill to the front. On her head, she wears a headband (stephane) which was decorated with paint.

Her calves and her left hand were discovered sometime in 1882 to 1883 east of the Parthenon, and the the rest of the statue with its base were found in 1886 in the so-called Korai Pit northwest of the Erectheion.

Statue of the Kritios Boy

Archaeologists have named this statue after the sculptor believed to have created it. It is considered one of the most important works of all ancient Greek art and the most characteristic of the “Severe Style.”

The boy stands in the nude, supporting his weight on the left leg while the right is bent at the knee, a characteristic posture of that particular style.

The boy has a solemn expression and his eyes, which were constructed of another material, are missing. His hair closely follows the shape of his scalp, tightly held around by a band with loose strands falling on his temples.

His hair shows traces of preserved red dye, as in other statues at the Acropolis Museum.  The statue is attributed to Kritios because of similarities with the statue of Harmodios, another one of his creations.

It is unknown exactly whom the statue portrays. Some scholars believe it represents a young athlete. Others claim it depicts a hero, most likely Theseus at a young age.

This statue depicts a bearded man wearing a thin himation that was likely painted originally, carrying a calf on his shoulders as his offering to the goddess Athena.

His face is expressive, even though the irises of his eyes, made of another material, are now lost. He wears an “archaic smile,” looking almost amused to us today.

On the statue’s base there is an inscription informing us that the statue was dedicated by Rhombos, the son of Palos. It is believed that the statue depicts Rhombos himself, who was a wealthy Athenian who could afford to dedicate something as expensive as a marble statue.

The motif of a man carrying an animal appears frequently in small bronze figurines but this is the first known motif on such a large scale in marble.

The body of the statue now exhibited at the Acropolis Museum was found in 1864 while the base with the man’s feet was discovered in 1887.

Two statues made from the same piece of marble are interpreted as Kekrops, the first king of Athens, and his daughter Pandrosos.

The figures kneel on the ground while they are turned towards Athena and Poseidon who have a dispute, and they are at the center of the pediment.

The man rests on his left arm and raises his right hand in which perhaps he held some sort of scepter. The young woman is depicted in smaller scale with her right arm on her father’s shoulders.

A snake sculpted in a separate piece of marble coils between the two figures indicates the native origin of king Kekrops.

Unlike other exhibits at the Acropolis Museum, the statues were in their original place on the Parthenon’s pediment until 1977 when they were removed for their protection from air pollution and bad weather conditions.

Their heads and parts of their arms, as well as the snake, were lost beforehand. Today, only a plaster copy is exhibited at the Acropolis Museum.

Only a part of the snake has been preserved, which is currently in the British Museum in London after it was forcefully chipped off the façade of the Parthenon by Lord Elgin, who removed most of the pediment’s sculptures between 1801 and 1804.

The Loutrophoros is an amphora decorated in the black figure technique. On the neck, there is a depiction of a procession of women who carry torches and play flutes.

The body of the vase is decorated with the women taking a bride to the groom’s house, led by Hermes in his winged sandals, Apollo playing his lyre and a woman who is presumably a goddess holding a flower.

The newlyweds are on a chariot pulled by four horses, driven by the groom. Only the raised hand of the bride can be seen. Following the chariot is the bride’s mother, who holds a torch.

The amphora is made using the black-figure technique. It was discovered in fragments in 1955 and 1957.

Statue of the Persian or Scythian Rider

The statue of the rider has experts arguing whether he is Scythian or Persian based on his eastern attire.

He is dressed in a short chiton with leaf-like motifs in green, red, and blue with a yellow outline.

His tight trousers are decorated with colorful diamonds the size of which diminishes downwards, signifying the elasticity of the knitted fabric.

The rider wears red boots with the laces secured by bronze pins. He is an archer, as seen from the drilled holes on his left thigh, once used for attaching the quiver.

The horse’s forelocks were also used to insert fixed bronze tufts of horsehair, which made its appearance even more impressive.

The “Scythian” interpretation stems from the fact that Athenians used Scythian mercenaries to work as policemen during the sixth century BC.

The Athenian general Miltiades was the one who won the Battle of Marathon in 490 BC. When younger, Miltiades spent much time in Thrace where he had fought against the Scythians on the side of the Persians in order to protect Athens’ interests in the Black Sea region.

The rider statue now at the Acropolis Museum was discovered close to the Erechtheion in many fragments in 1886. It was reassembled and restored.