Euripides’ The Trojan Women – An Unflinching Look at Brutality of War 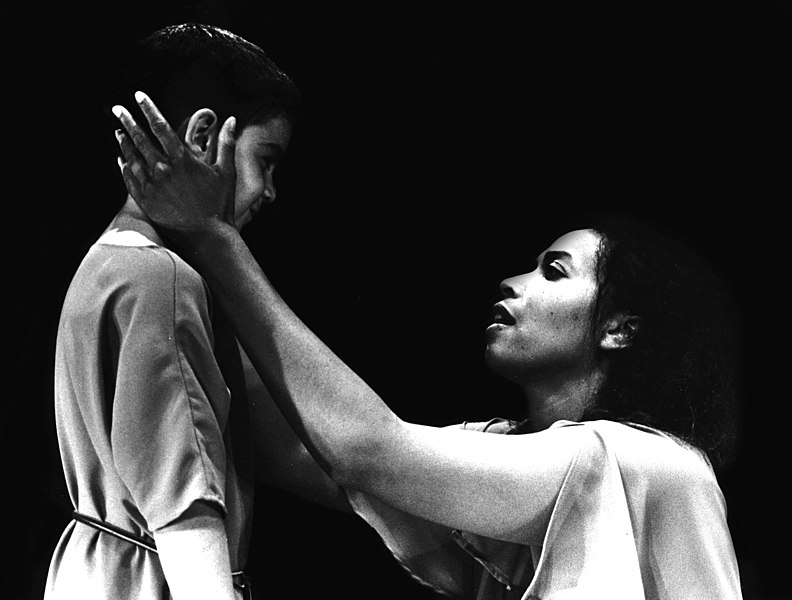 Aomawa Baker as Andromache in Brad Mays’ production of Euripides’ The Trojan Woman, presented at the ARK Theatre Company in Los Angeles in 2003. Credit: Wikipedia/Bradmays/CC-BY-SA-3.0

The Trojan Women is a genocide narrative. In this play, the great Athenian dramatist Euripides explores the enslavement of women, human sacrifice, rape and infanticide.

The story of the long struggle for the life of the city of Troy might be thought of as the pre-eminent Greek myth. Extensive narratives of the war are told in the oral traditions of myth and literature, and they also appear very significantly in the material evidence of Greek art and architecture.

The Trojan Women, a play by the great Athenian dramatist Euripides (485-406 BC), was produced in Athens in the early spring of 415 BC. It is set immediately after the fall of Troy and the killing of the Trojan men, when the fates of the royal women and children of the city are being decided by the victorious Greeks.

The grim subject matter and mood of the play in its Trojan setting have a parallel in the Peloponnesian War, which was being fought at the time between Athens and Sparta (431 to 404 BC). The Trojan Women speaks both to the renowned war at Troy, described most famously by Homer in the Iliad, and to the great military struggle taking place in Euripides’ own lifetime.

If there was a historical Trojan War it was probably fought in the late Bronze Age, perhaps in the 12th century BC at Hisarlik in what is now northwest Turkey. Accounts of the war seem to have been passed on orally, culminating in epic poems that probably date to the end of the 8th century BC and after. The Iliad (c. 700 BC) and Homer’s Odyssey (dated perhaps to a generation or two after the Iliad) are our two surviving early Greek epic poems on the Troy theme.

But we also know of a series of poems, now lost, called the “Epic Cycle”, six of which are focused on the Troy saga. All of these offered accounts of different parts of the Trojan War (which in the Greek tradition lasted for 10 years).

Early Greek epics made no attempt to document the historicity of the conflict in a modern sense, not the least because history hadn’t been invented when they were composed. History (a Greek word meaning “research” or “enquiry”) is a product of later (i.e., 6th and 5th century BC) rationalism and literacy.

One of four themed plays

As a late 5th century BC Athenian dramatist, Euripides is an heir both to the traditions of oral poetry and mythmaking, and to the rational enquiry of philosophy, rhetoric and history in a broad sense. While Homer was greatly admired by the literati in 5th century Athens, he does represent a world already long gone. (Homer’s Iliad may date up to 300 years before Euripides’ Trojan Women – as distant a period as the early 18th century is for us.)

Euripides himself (485-406 BC) was still writing into old age, not unlike his contemporary, the tragedian Sophocles (497/6-406 BC), who was still producing plays at Athens into his early nineties! Euripides wrote about 90 plays, of which 18 survive, whereas the evergreen Sophocles wrote more than 120 plays, only 7 of which survive. They often competed at the dramatic festivals, with Sophocles easily the more successful.

Euripides wrote four plays for performance on that day in the early spring of 415 BC, although only The Trojan Women has survived. We know, not the least from fragmentary evidence, that the first three plays were on the Trojan War theme, but they were not a tightly interconnected trilogy of plays, as is Aeschylus’ Oresteia.

First was the play Alexander, which focused on the earlier life of the Trojan archer-figure Paris, or Alexander, as he is often known. In the myth of Troy it is he who judges the divine beauty contest (the Judgement of Paris), that precipitates the war between Greeks and Trojans.

The second play was the Palamedes, about a clever but rather obscure Greek prince at Troy. The Trojan Women was the third play presented on that day, and was followed in turn by a more light-hearted “satyr play” called the Sisyphus.

We learn from an ancient source that Euripides’ plays came second in the dramatic competition of the year 415 BC.

The Trojan Women focuses on a small group of women of the royal house of Troy who await their fate in Greece – Hecuba, the widow of king Priam; Cassandra, the prophetess daughter of Priam and Hecuba; Andromache, widow of Hector and mother of the boy Astyanax; and Helen of Sparta, who has to plead for her life from Menelaus, her former husband. The chorus of the play are captive Trojan women.

The only Greek prince to feature as a character is Menelaus himself whose task is to decide on Helen’s fate now that she has been captured. The cruel decisions of the departing Greek forces occur with Odysseus as a key player, but these are enunciated to the women by Talthybius, a Greek herald.

The women are dispersed as slaves to particular princes throughout the Greek world who have led contingents within the Greek army. The obvious cruelty of this process is added to by the cold calculation as to who will go where.

Thus, the girl Polyxena, daughter of Priam and Hecuba, was supposed to go to Achilles after the war; but seeing Achilles is now dead, she is sacrificed at his tomb.

Hector’s wife Andromache goes to Achilles’ son Neoptolemus because Hector and Achilles were rivals and had a major single combat in battle (told in Book 22 of the Iliad). Hecuba herself is to go to Odysseus – a terrible fate, upon which she laments her ill-fortune: “it is my lot to be slave to a vile and treacherous man”.

Cassandra will go as a sex slave to the lascivious and repulsive figure of Agamemnon, while Helen – the face that launched a thousand ships – is given back to Menelaus.

Cassandra is murdered with Agamemnon upon their return to Mycenae, whereas Helen is a remarkable survivor upon her return to Greece. We encounter Helen again most especially in Homer’s Odyssey Book 4, where she has a kind of “normal” life and marriage with her former husband Menelaus in Sparta.

It is important to remember that the extended story of the Trojan War is a genocide narrative, and that this comes through very emphatically within the play itself (as it does in other Greek literature).

The Greeks did not shrink from describing Greek atrocities perpetrated on the defeated Trojans. Indeed it is a feature of their narratives to focus on Greek cruelty. In the Iliad, for instance, Agamemnon urges his brother Menelaus on the battlefield to kill all Trojans, “even the boy that is carried in a mother’s womb.”

The horrific culmination of the cruelty in the Trojan Women is the killing of the boy Astyanax, the very young son of Hector and Andromache. This occurs within the course of the play itself (off stage, of course). Odysseus comes up with the idea of throwing him from the battlements of the city, and the Greeks even threaten to refuse the burial of his body if the Trojan women don’t cooperate with the decision to execute the boy.

Astyanax is a silent character in Homer and in Euripides, but his fate in the aftermath of the war speaks to us about infanticide, much as the fates of the Trojan women do with regard to rape and murder and the enslavement of women in war.

It does seem to be significant too that the only compassion for the women coming from Greek male characters in the play belongs to Talthybius, the (non-aristocratic) herald of the Greeks.

The Athenian audience in 415 BC knew very well the main mythical narratives of the aftermath of the Trojan war and the return home. They would know all about the death of Astyanax and about the return of Helen to Sparta to live again with her husband. They would also know, not the least from the prologue of Euripides’ play itself, that the Greek fleet will be hit by storms on the journey home on account of the rape of Cassandra by Locrian Ajax at the altar of Athena – an unpunished act which occurred prior to the opening of the play.

So the Trojan Women deals with the sharp end of Greek brutality in the war for Troy – the enslavement of women, human sacrifice, rape and infanticide.

The graphic violence dealt with in the play speaks to us about the absence of heroism in the narrative of Troy, despite what Homer and the epic poets provided in their earlier accounts.

The focus on women’s suffering in the war is in keeping with other works by Euripides, many of whose plays focused on female lives and female suffering in relentlessly male dominated environments.

Inevitably, Euripides’ play has inspired many later treatments of the Trojan women theme. Two modern conscious responses to the Greek poets are novels by English author Pat Barker, who was moved to write The Silence of the Girls, based around the Iliad, and (most recently) The Women of Troy: A Novel, to hear the voices of the women themselves from Euripides’ play.

Lucy Hughes-Hallett’s review of The Women of Troy in the Guardian reiterates the violence of the language in Barker’s version: “clearly and simply told, with no obscurities of vocabulary or allusion, this novel reads sometimes like a retelling for children of the legend of Troy, but its conclusions are for adults – merciless, stripped of consoling, impressively bleak.”

Chris Mackie is a Professor of Classics at La Trobe University. This article was published in The Conversation and is republished under a Creative Commons License.