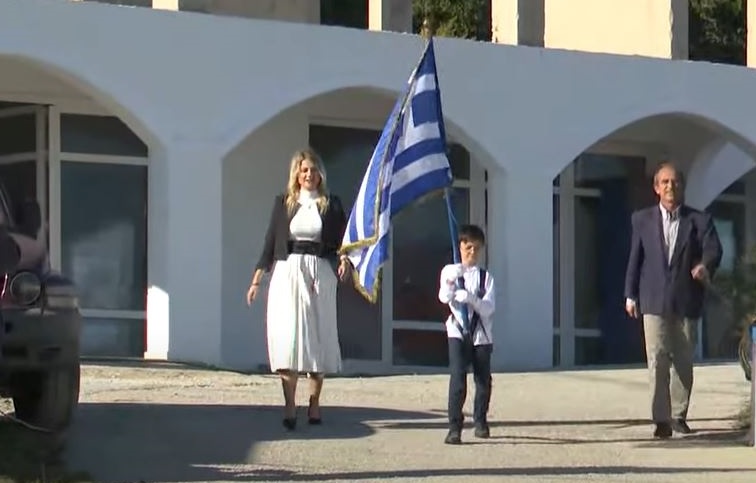 A nine-year-old Greek student who lives on a small Ionian island had the privilege of parading all alone on OXI day. It sounds like an oddity, but it is a fairly usual situation in remote island student parades every year in Greece on the celebration of the great national day.

The boy, named Tasos, is the only student in Mathraki’s primary school. He moved to the Ionian island with his mother last summer, after they both saw some images of it online.

Mathraki is a tiny island and a former community of the Ionian Islands. It is a 45-minute boat ride off the coast of Corfu. It has three restaurants that double as general stores, villas and “rooms to let.”

Its resident inhabitants number approximately 30; they are mostly elderly people. Mathraki is a quiet Ionian island that manages to stay clear of tourists except for the occasional hikers that brave the rocky coastline.

Most of Mathraki’s natives have sadly abandoned the picturesque Ionian island for more prosperous and spacious places in Greece. Moving there on a whim, young Tasos and his mother represent a breath of fresh air on the 3.532 square kilometer (1.36 square mile) island.

More than 20 years since the last parade

It’s been 21 years since children last paraded on OXI day in Mathraki. So naturally, the Ionian island’s residents are more than excited about Tasos parading alone, proudly carrying the Greek flag on Thursday.

The decision to move to the Ionian island was taken in a matter of seconds, after looking at some pictures online, says Tasos’ mother, Evgenia Giannopoulou. “It may be the most beautiful island in Greece,” she adds.

The two of them visited Mathraki last summer and decided almost immediately to make their life on the Ionian island. They knew it might be hard, without the comforts of the big city they were accustomed to, but that didn’t deter them.

When they arrived, Mathraki didn’t have a functional school, since no children were living on the Ionian island. The municipality and the Education ministry’s school services acted fast, however, and in mid-September the school was ready.

The reopening process was sped up by the assistance of some non-profit organizations, so that Tasos could get to class on time. The school building was soon equipped with offices, computers, stationery and other materials donated by island residents.

Tasos’ classroom is situated at a municipal hall, practically on the island’s small port. It was decorated for the OXI day parade occasion with Greek flags and a small celebration was held on Tuesday, with all the Ionian island’s residents present.

Tasos’ teacher is 28-year-old Eleftheria Viza, a substitute teacher posted on the island to serve the one-student class. She says their relationship extends beyond teaching. They spend their breaks together, and play games together — and they will be together at Thursday’s parade.

Tasos is a gifted student, who already speaks three languages. His family, which comes from Thessaloniki, has spent time in Germany and the US. Tasos is proud to parade on his own, carrying the Greek flag on behalf of the whole island.

His only wish for the future is that more children his age with their families decide to move to Mathraki. Next year on OXI day, he would like to see more students parading with him on the island.